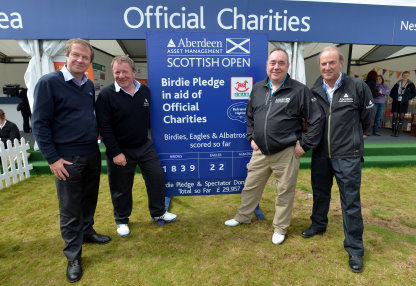 First Minister of Scotland Alex Salmond, Martin Gilbert, Chief Executive of Aberdeen Asset Management and George O’Grady, Chief Executive of The European Tour, joined the two Official Charities of the event during the final afternoon at Castle Stuart Golf Links near Invernessas a tremendous week of fundraising for the two local charities was drawing to a close.

Roslyn Neely, Director of Fundraising for Children’s Hospice Association of Scotland (CHAS) and David Stallard, Director of Befrienders Highland welcomed the visitors to the Official Charity stand as the main fundraising initiative, the Aberdeen Asset Management Birdie Pledge, edged closer to the landmark figure of £20,000.

The Birdie Pledge sees funds donated by both Aberdeen and the charitable arm of the European Tour, The Tour Players Foundation (TPF) for each birdie, eagle and albatross made by the players on course – a total of £10, £20 and £50 respectively. As the leaders headed towards the closing holes the tally stood at 1,839 birdies and 22 eagles.

Special donations were made for the two holes in one at the 168 yard par 3 11th hole at Castle Stuart this week.Aberdeenand TPF each donated a pound for every yard of the hole on both occasions to mark Andrew Johnston and Peter Whiteford’s aces.

The spectating public have also played their part by making discretionary donations of £1 when they receive an Official Drawsheet and the total is set to surpass £30,000 that will be shared equally between CHAS and Befrienders Highland enabling the Aberdeen Asset Management Scottish Open to have a positive charitable impact on the Inverness andHighlandregion.