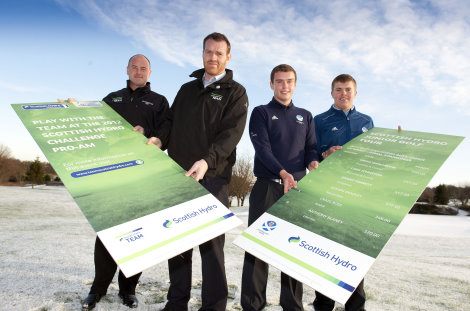 The Scottish Golf Union is delighted to announce an exciting new sponsorship agreement with Scottish Hydro who will be investing in junior golf for the next three years (2012-14).

Scottish Hydro, already a major supporter of golf inScotlandthrough their sponsorship of the Scottish Hydro Challenge on The European Challenge Tour and Team Scottish Hydro programme, will become official sponsors of the SGU Boys’ Order of Merit and Junior Tour series.

The SGU Boys’ Order of Merit, which ranks the country’s best performing youngsters across a number of major events throughout the season, counts Michael Stewart, David Law and Scott Henry among its previous winners. Greig Marchbank, of Dumfries andCountyGolf Club, was the 2011 victor. The Boys’ Order of Merit will include three 54-hole Scottish Hydro Junior Tour events on its schedule in 2012.

Craig Lee, a successful member of Team Scottish Hydro, who gained a place on The European Tour next season courtesy of his 14th place finish on the Challenge Tour in 2011, welcomed the new sponsorship.

The 34-year-old from Stirling said: “It’s great to see Scottish Hydro extending their sponsorship of golf even further intoScotland’s most talented youngsters and hopefully their support will help see more young players come through the SGU’s development programmes.

“Their support of myself and the other Team Scottish Hydro players on The European Challenge Tour has made a huge difference to us all and we look forward to passing on our knowledge and experience to the next generation as part of the partnership.”

Jonny Petrie, Sponsorship Manager for Scottish Hydro, said: “Scottish Hydro has been a supporter of emerging talent in golf for a number of years now and this partnership with the SGU provides us with an excellent means of developing that. We hope to see a stream of young players from acrossScotlandcoming through the ranks to forge successful careers – for us to be part of that is hugely exciting.”

Hamish Grey, CEO of the Scottish Golf Union, added: “We’re delighted to welcome Scottish Hydro to our ever-growing portfolio of sponsors and their investment will help support the staging of a number of key events on the Junior Tour series. These events are crucial to the development of our best youngsters, giving them the chance to compete on great courses in a highly competitive environment.

“Scottish Hydro has been a great supporter of golf inScotlandover the past three years and it is encouraging to see such a major brand investing in the game at all levels, from grass-roots level through to our elite Tour professionals.”

At the announcement at Marriott Dalmahoy Hotel and Country Club earlier today, the opportunity was also taken to launch the 2012 edition of The Scottish Hydro National Competition. The competition invites every male and female golf club member in Scotlandto participate in their allocated Club Medal during April and, along with two friends, make up the Team Scottish Hydro players’ Pro-Am teams at The Scottish Hydro Challenge on the eve of the event at the Macdonald Spey Valley Golf Course from 21-24 June, 2012. For more details visit: http://www.teamscottishhydro.com/national-competition