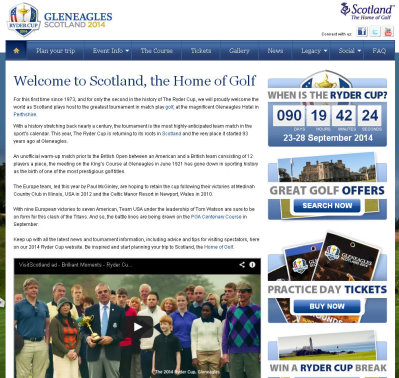 Scotland’s journey towards The 2014 Ryder Cup hits a key milestone this week with the Scottish Hydro Challenge becoming the 50th golf tournament supported as part of The Ryder Cup legacy programme.

A key commitment of Scotland’s bid to host The Ryder Cup was to build and develop a strong portfolio of domestic golf events – a commitment delivered by EventScotland and highlighted by reaching the half-century mark this week in Aviemore.

The Scottish Hydro Challenge has been a key tournament in ensuring that opportunities are given to the next wave of Scottish professional golfers in terms of advancing to the next stage of their careers and represents nine of the 50 events, having been supported since 2006.

The milestone has been passed in just 11 years since EventScotland was given the task of delivering Scotland’s Ryder Cup commitments and by the time The Ryder Cup is played at Gleneagles in September, this number will have risen to 55.

Paul Bush, Chief Operating Officer of EventScotland, said: “Reaching the landmark of 50 supported golf events since 2003 is a terrific milestone and demonstrates the commitment we have in terms of reinforcing Scotland’s position as the Home of Golf and delivering on our commitments as host nation of The 2014 Ryder Cup.

“We look back with great pride at the tournaments we have supported over the last 11 years. These events have benefitted many regions of Scotland in terms of direct economic benefit, marketing exposure around the world or simply bringing a high profile event to a new venue or new area of the country and inspiring people in Scotland to take a stronger interest in the game.

“The support of golf tournaments is a key part of our national events strategy and that work will not stop going forward. The 2014 Ryder Cup at Gleneagles will be the 55th supported event since 2003 with many more confirmed for 2015 and beyond.”

The building of Scotland’s golf event portfolio as part of The 2014 Ryder Cup began in 2003 with EventScotland’s support of The Senior Open Championship at Turnberry. Since then tournaments have been supported at a total of 16 venues across Scotland.

These are in addition to other events such as The Open Championship, RICOH Women’s British Open, Curtis Cup and Walker Cup that have also been supported in Scotland.

Ryder Cup Director Richard Hills said: “Everyone at Ryder Cup Europe congratulates EventScotland on the significant milestone of reaching 50 golf tournaments supported as part of The Ryder Cup legacy programme. The commitment shown, which has embraced all our Tours – The European Tour, the Senior Tour and the Challenge Tour such as this week’s event in Aviemore – is greatly appreciated and, together, we are very much looking forward to the final run-in to The Ryder Cup itself at Gleneagles in three months’ time.”