‘Santa Claus’ To Play At US PGA 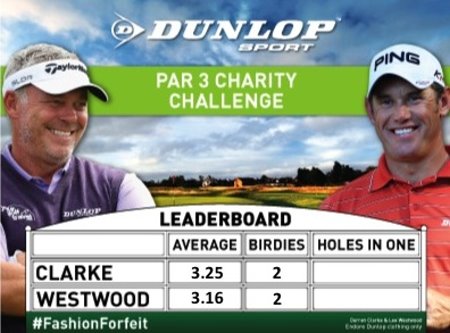 Darren Clarke will play his first round at the US PGA Championship at Valhalla GC dressed in a‘Santa-inspired’ outfit. The all red combination was chosen by fellow Ryder Cup star Lee Westwood after losing out in the Dunlop Par Three Challenge.

The golfing legends added a bit of spice to The Majors in 2014 by going head-to-head across par threes at the Majors this year. The challenge victory has seen Westwood pick Clarke’s outfit for The PGA. With Darren recently growing a grey beard, Westwood declared the Northern Irishman has been looking more and more like Santa and decided an all red outfit would be the icing on the cake.

In addition to the fashion forfeit element of the Dunlop Charity Challenge the lowest average score over the first three majors of the year would receive a £10,000 cheque to be donated to a cause of the golfer’s choice. Further bonuses of £250 per birdie and a whopping £10,000 for a hole in one were also up for grabs. Westwood’s efforts across the Majors this year will see a cheque donated to Thornhill Golf Club where a number of the Englishman’s family and friends are members.

Lee Westwood, who endorses Dunlop clothing only, said: “The Dunlop Par Three Challenge has added some spice to the Majors this year. It’s been great fun and has given me some serious power this week. I wanted to make full use of it. I’ve been saying to Darren that his new facial hairis making him look more like Father Christmas every day so maybe he’ll have a rethink. Not only will golf fans benefit from the fashion forfeit but Thornhill GC will be getting a nice cheque from Dunlop which will go along way for a club of their size.”

Darren Clarke, who also endorses Dunlop clothing, added: “I personally think the beard looks great but obviously Lee disagrees. I’m prepared to get some stick on Thursday but it’s in good nature so I’ll happily take it on the chin. I like to see a bet through and I wasn’t about to give Lee the satisfaction of that stopping now. We’ll have a good laugh about it all in what should be a fantastic tournament.”

David Newbury, Dunlop’s Head of Brand Marketing. “Our sponsorship of Darren and Lee has always been famous for its originality and innovation. The £2 million bonus deal shows how committed we are to sharing their success and the Dunlop Par Three Challenge is another initiative to help support our partnership with two of Europe’s finest golfers. We’re very pleased to be able to make the donation to Thornhill GC on Lee’s behalf and look forward to seeing Darren ‘Santa’ Clarke at the first tee!”

Westwood and Clarke both enjoy a unique, clothing-only sponsorship deal with Dunlop, whereby their agreement with the leading golf brand also stipulates that they receive a massive £2 million bonus for every major championship victory.