Ryder Cup is a winner for England Golf 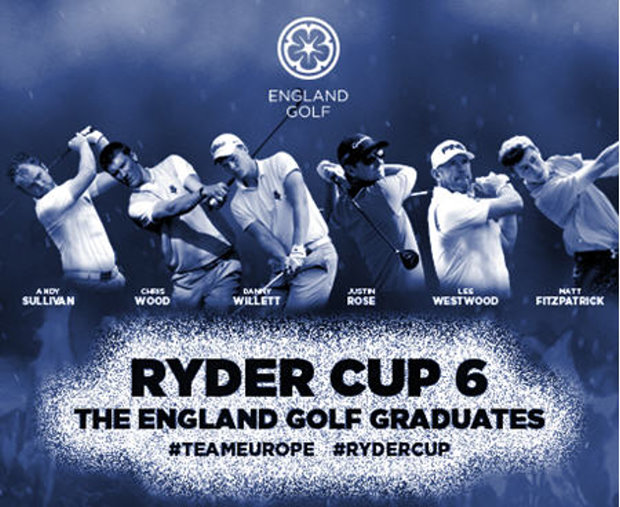 Matt Fitzpatrick, Justin Rose, Andy Sullivan, Lee Westwood, Danny Willett and Chris Wood make up half of Team Europe – and all played for England as amateurs.

England Golf chief executive Nick Pink said: “We’re wishing the European team the very best of luck and we’re immensely proud that six of the players are English and that, with our clubs and counties, we supported their development.

“This is a huge inspiration for today’s ambitious amateurs and a terrific reward for all the volunteers and coaches who work so hard to support our talented players.”

The Parliamentary Golf Group has also wished the European Ryder Cup team well ahead of the competition at Hazeltine National in Minnesota, USA.

In a letter to the Darren Clarke, Captain of Team Europe, the Group Chairman Karl McCartney MP passed on the best wishes of all members of the group, and expressed hope: “that the event will help to promote our game across the UK and inspire more people to pick up their clubs, take part in physical activity, and keep fit and healthy.”

In addition to England’s six players, Team Europe also includes Rory McIlroy, from Northern Ireland, while England, Northern Ireland and Scotland are also represented by the captain and vice-captains.

Karl McCartney commented: “I am looking forward to following the action with great excitement, and hope that Team Europe can prevail to win their fourth competition in a row. Golf is a sport for all, and I hope that the strong UK presence in the team will encourage the next generation of young golfers.”

Matt Fitzpatrick is from Hallamshire, Yorkshire, and was the US amateur champion and the world number one amateur before turning pro. He has already won twice.

Justin Rose is an England Golf ambassador, the first Olympic golf champion in 112 years and the 2013 US Open champion. He played at North Hants, Hampshire, as an amateur.

Andy Sullivan represented Nuneaton, Warwickshire, as an amateur. He turned pro in 2011 after helping to win the Walker Cup and has won three times on the European Tour.

Lee Westwood, a former world number one, is about to play his 10th Ryder Cup. He was an amateur at Worksop, Nottinghamshire, and writes on the club’s website: “I’ll never forget my roots. They are firmly embedded in the fairways of Worksop Golf Club.”

Danny Willett, the 2016 Masters champion, represented Rotherham, Yorkshire, as an amateur and was English champion and world number one before turning pro.

Chris Wood, the 2016 BMW PGA champion, is from Long Ashton, Gloucestershire. He was England’s number one amateur for two years before turning pro.

After naming seven players last week, the 2021 European PING Junior Solheim Cup Team has been finalised with the final five players being confirmed.

The Belfry Hotel & Resort is to play host to next week's 2021 FootGolf UK Open.