The R&A announced today that The 148th  Open will be played at Royal Portrush in 2019, marking a historic return to Northern Ireland for golf’s oldest and most international Championship after nearly 70 years.

The Open, which was played at Royal Portrush in 1951, when Englishman Max Faulkner lifted the famous Claret Jug, is expected to be the biggest sporting event ever held in Northern Ireland, generating more than £70 million in terms of economic impact and destination marketing benefit. 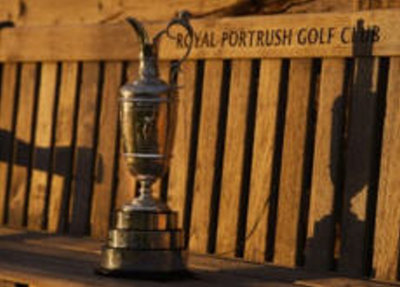 Northern Ireland will be at the centre of the global sporting spotlight from 18-21 July 2019 as The Open is staged outside of Scotland and England for only the second time in the Championship’s more than 150-year history with sports fans from throughout Ireland and around the world expected to descend upon the town of Portrush.

Peter Unsworth, the Chairman of The R&A’s Championship Committee, said, “We are very much looking forward to bringing The Open to Royal Portrush in 2019 and believe it will be a tremendous venue for the Championship. We know there is great anticipation throughout Ireland at the prospect of welcoming the world’s top golfers and it promises to be a hugely memorable week. We are delighted with the progress being made on the course preparations and they will undoubtedly enhance the challenge presented by these historic links.”

Acting First Minister Arlene Foster said, “I welcome today’s announcement that The Open Championship is to be held at Royal Portrush in 2019 and twice again in the future. Securing The Open Championship at Royal Portrush is a magnificent achievement. It is a key part of Tourism NI’s events strategy and is crucial to consolidating our efforts to grow visitor numbers and visitor spend.”

The Deputy First Minister Martin McGuinness, said, “The potential economic return of £70 million makes The Open coming to Portrush in 2019 a success story not just for golf and golfing fans but our entire economy. I commend The R&A for their confidence and commitment to Portrush. For our part we stand ready to help ensure the necessary infrastructure is in place and ensure the focus remains on the golf course. I have no doubt the 2019 Open at Royal Portush which will be broadcast to half a billion people worldwide will be a stunning sporting success.”

Darren Clarke, said, “This is going to be absolutely huge for Northern Ireland and, indeed, Ireland as a whole. To have the world’s biggest and best golf Championship played at such a fantastic venue as Royal Portrush, with all the passion that the Irish fans will bring to the event, is going to be amazing.”

Rory McIlroy, who lifted the Claret Jug at Royal Liverpool in 2014, added, “Royal Portrush is one of my favourite golf courses in the world. I think it will be a fantastic Open venue. They are going to add a couple of new holes to the golf course and I think that will be a great addition and will make the course even stronger. I’m really looking forward to it.”

Course preparations and the work to create the two new holes on the renowned Dunluce Links are well underway. The new 7th and 8th holes will utilise land from the adjacent Valley Course to develop a new par 5 hole, playing down into the valley encompassing that course’s 6th hole, and then a par four, playing back over its 5th hole into some beautiful duneland. Both holes will have an immediate air of maturity using some of the most stunning land at Royal Portrush. The new holes will replace the current 17th and 18th holes on the Dunluce Links, freeing up that land to be used to accommodate the Spectator Village and Championship infrastructure.

Earlier this year the proposals were approved by the Royal Portrush membership and the work is being overseen by Martin Ebert of Mackenzie & Ebert the Club’s golf course architects. As well as creating two new holes, a series of other changes are being made to the course to enhance the challenge that will face the world’s top golfers while remaining true to the ethos of Harry Colt’s original design.

The most significant changes will be to move the 2nd green to lengthen the par five hole by around 40 yards and on the current 10th hole, which will be the 12th at The Open, to alter the line of the hole and extend it by 50 yards. Elsewhere, the existing 8th green (the 10th at The Open), which was not designed by Colt, will be reshaped and several new back tees will be created.

The overall length of the course will increase by just under 200 yards to 7,337 yards and the number of bunkers will be increased by three to 62 in total, still leaving Royal Portrush with the fewest bunkers of any of the courses which host The Open.

The work on the Dunluce Links is due to be complete by the middle of 2016 with the two new holes being given time to grow-in ahead of the following season.