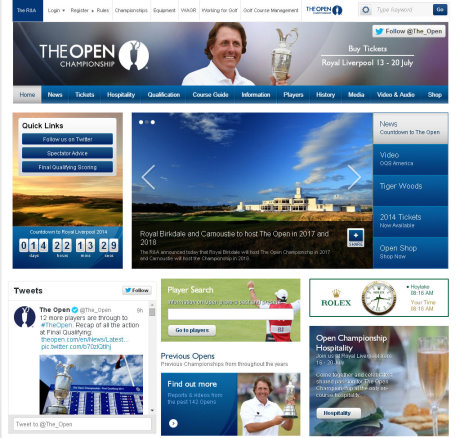 Five-time Open Champion Tom Watson, who won The Open at Royal Birkdale in 1983 and at Carnoustie in 1975, joined The R&A to make the announcement at the Greenbrier.

“I am delighted to see The Open returning to two great venues in Royal Birkdale and Carnoustie,” he said. “I know both courses are held in high regard by the players and I certainly consider them to be wonderful tests of golf.

“When I first played in The Open at Carnoustie I still had a lot to learn about links golf but I quickly adapted to the challenge of playing in the wind and keeping the ball low. I played well that week and was thrilled to win the play-off.

“Royal Birkdale is also a fine links course and I have always thoroughly enjoyed playing there. I think the players and the fans will be excited to see the top players playing these courses once again.”

Royal Birkdale will host The Open for the tenth time in 2017. Ireland’s Padraig Harrington won by four shots from Ian Poulter the last time the Championship was played there in 2008. Mark O’ Meara emerged victorious from a play-off with Brian Watts in 1998 and Ian Baker-Finch enjoyed a two-shot victory over his fellow Australian Mike Harwood in 1991. Another Australian, Peter Thomson, won The Open when it was first staged at Royal Birkdale in 1954, and again in 1965, and he was joined by Arnold Palmer (1961), Lee Trevino (1971) and Johnny Miller (1976) as winners in the North West.

Richard Hunt, the Captain of Royal Birkdale, said, “We will be delighted to welcome The Open Championship back to Royal Birkdale in 2017.‎ The club has a long and proud history of hosting The Open and some of the game’s greatest players have won here. We regard it as a privilege to host the Championship and look forward to seeing the world’s top players facing the challenges of Royal Birkdale once again.”

2018 will be the eighth occasion on which Carnoustie has hosted The Open Championship and the first since Harrington lifted the Claret Jug there in 2007 after defeating Sergio Garcia in a play-off. In 1999, Scotland’s Paul Lawrie triumphed after a play-off with Justin Leonard and Jean Van de Velde. Ben Hogan famously won The Open at Carnoustie in 1953 on the only occasion he played in the Championship and the other winners at the Angus links are Tommy Armour (1931), Henry Cotton (1937) and Gary Player (1968).

Pat Sawers, Chairman Carnoustie Golf Links, said, “We are very much looking forward to welcoming The Open Championship back for an eighth time to the historic links at Carnoustie in 2018 and feel sure the Championship will generate just as much interest and excitement as in previous years. We believe the fact The R&A has invited us to stage the 2018 Championship will provide a big boost to golf in the local area and will have a beneficial effect on our on-going efforts to attract more local youngsters into the game.”