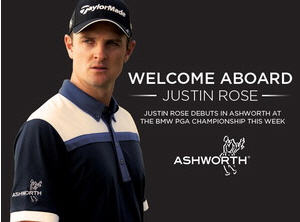 Rose, currently ranked ninth in the Official World Golf Rankings, will make the switch to Ashworth’s current line of apparel and footwear this week at the European Tour’s BMW PGA Championship at Wentworth.

“I am really excited about partnering with Ashworth going forward; I think that it comes at the right time for me”, says Rose, “I am now into my thirties; my sense of style has evolved over the last couple years and I am certainly a lot more clear about what I want to achieve going forward and how I want to look doing it.”

“Justin is the right man at the right time for the Ashworth brand. He’s fit, focused and poised, and continues to mature as a player,” said Kevin Ross, VP Ashworth Golf. “He maintains dual membership on the PGA and European Tours, has won multiple times professionally, and possesses the tools to win a Major Championship.”

On the course, Rose is known for his style, class and inviting personality. Off the course, he is a devoted husband and father of two, and generously supports numerous worthy charities.

“For me I am the kind of player who one day wants to go down in history books, I want to achieve some great things and still think that’s within my capabilities. To be partnering with a brand that already has achieved great things within the game, and that has a great history behind it, for me feels like a very good fit”, said Rose, “Hopefully throughout the rest of my career I can help Ashworth write a new chapter also.”