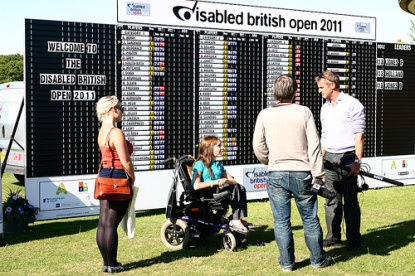 Golf’s largest pan-disability tournament, the Disabled British Open (DBO), has received a huge boost ahead of its fourth staging with the creation of a new company specifically designed to build upon its already impressive success.

Since its inception and inaugural outing in 2009, the event has been supported by Accentuate – a Legacy Trust-funded body – as one of its many programmes, but it will now be in the custodianship of Remarkable Events.

The new company – a joint venture between Tourism South East (TSE), the creator of the DBO, and Azalea, the company which has managed it since its inception – will run, manage and grow the event and its sister-competition the Junior Disabled British Open.

The event has been televised on Sky Sports each year and international participation is increasing – this year saw the firstUScompetitor, Jason Faircloth, fromClinton,North Carolina.

Peter Colling, operations director for TSE, paid tribute to Accentuate, the Legacy Trust UK-funded programme designed to change perceptions and offer opportunities to showcase the talents of deaf and disabled people, which supported the DBO in its first three years. He said: “The DBO was conceived by Tourism South-East but it was thanks to the support of Accentuate that the DBO has managed to continue growing since the first event in 2009. The project’s overall mandate was to create a lasting legacy from the London 2012 Olympic and Paralympic Games and the DBO is undoubtedly a large part of that legacy.

“Remarkable Events will pick up the baton from Accentuate and will guide the DBO and JDBO forward in the future and take it on to become bigger and better. Tourism South East was happy to enter into this partnership with the Azalea Group as they have managed and run the event successfully since day one.

“The team at Azalea has a passion for the event which shines through. Now, both parties have a stake in the DBO’s future and that is a good thing for everybody, competitors and organisers alike.”

His sentiments were echoed by Andy Barwell, a director of Azalea – and now, also, Remarkable Events. He said: “This is a great opportunity for all involved to continue to be part of something that is really special … Remarkable if you like. The event could not continue to be publicly funded, and Remarkable Events will be charged with finding the funding to continue to deliver a high-quality competition that attracts competitors from across the globe. We have big plans for the future of this event and will be sitting down in the near future with a number of potential sponsors and are in the process of finalising details for the 2012 DBO.”

Esther Fox, programme director of Accentuate, added: “The DBO has been a wonderful example of an Accentuate project, as it represents much of what we hope to achieve.

“It raises the profile of disabled people at international level by promoting talent and professionalism. Accentuate is funded by Legacy Trust and we hope to create a lasting legacy from the 2012 Games, therefore we are delighted to hear that there is a future for this fantastic event and we will certainly do all we can to support it.”