RBS partners with clubgolf to drive future of Scottish Golf 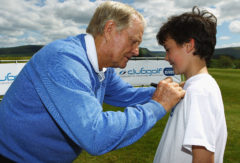 A new partnership between The Royal Bank of Scotland (RBS) and Scottish Golf to develop the country’s next generation of junior players was launched yesterday at Gleneagles by golfing legend Jack Nicklaus and First Minister Alex Salmond.

The Royal Bank of Scotland has agreed a three-year partnership with Scottish Golf to support its national junior golf programme clubgolf. Launched in 2003 as part of Scotland’s successful bid to stage the Ryder Cup in 2014, clubgolf has the objective of introducing every primary school child to golf by the age of nine. The collaboration will see RBS provide further infrastructure and support for the scheme, which is also benefiting from the backing of the bank’s global ambassador Jack Nicklaus, who designed the Gleneagles course that will host the Ryder Cup in three years.

With over 100 years’ history of supporting golf in Scotland, RBS is now supporting the future of golf at a local community level by backing the initiative that last year saw 37,000 youngsters try the sport, made possible by more than 1,400 qualified coaches from over 300 local golf clubs.

As part of the programme, The RBS Junior Club of the Year Awards will be created to recognise and reward those clubs making an outstanding contribution to the development of the game in their local community.

Jack Nicklaus, RBS global ambassador, said: “I’m passionate about the future of our game and introducing golf to juniors, providing access, equipment, instruction and the opportunity to enjoy game.  clubgolf, with the backing of RBS, has been created to help ensure that future generations of players from Scotland, the home of golf, are enjoying our game. ”

Alex Salmond, Scotland’s First Minister said: “This sponsorship deal between Royal Bank of Scotland and Scottish Golf to further fund and promote clubgolf over the next three years is continued evidence of the commitment business is making to sport.

“Scotland’s future golfing prowess will owe much to getting young people interested in the sport as early as possible. Today clubgolf is doing just that – giving primary school youngsters the chance to pick up some clubs, gain some confidence and then go on to be coached at clubs by qualified volunteers and pros. We are introducing record numbers of young people to the game. Since the initiative began, 180,000 children in P5 have picked up a set of clubs under the initiative which receives £500,000 Government funding annually.

“In some cases, youngsters who began clubgolf a few years ago have progressed through to the Scottish Golf Academy programme as well as our national squads. And who knows – some of those young sportsmen and women could go on to become this country’s golf stars of the future – perhaps even turning out for the European Ryder Cup team and the Solheim Cup team.”

Jackie Davidson, clubgolf manager, said: “We are delighted to bring RBS on board as the official sponsor of clubgolf. Their support and investment provides a significant boost for the programme and will not only help us achieve our target of introducing golf to every nine-year-old in Scotland by 2014 but will also further enable us to support clubs in retaining and growing junior membership. The partnership with RBS will also help raise the profile of clubgolf among a much wider audience with the aim of attracting even more youngsters, schools, clubs and volunteers into what is already a hugely successful grass roots sport initiative.”

David Webb, head of brand at RBS said: “We have changed our approach to sponsorship at RBS. Delivering benefits to the communities we work in now underpins all of our sponsorship activity and ultimately that’s good for business too. The clubgolf programme in partnership with Scottish Golf serves as further notice of our commitment to use our rich heritage in the sport to drive a better future for young golfers.”