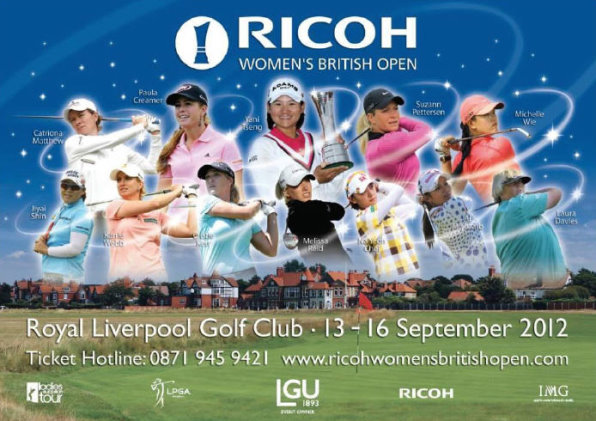 Paula Creamer, winner of the 2010 US Open and a brand ambassador for Ricoh, enthused “There are 12 really great players from all over the world pictured on the 2012 Ricoh Women’s British Open poster and it is pretty amazing to think how many other girls should probably be pictured too. I think it shows just how strong the women’s game is right now and how many different players could be challenging at the final Major of 2012. I definitely hope I am amongst those on the leaderboard on Sunday as it is one of my favourite events of the year and a tournament I would dearly love to win.”

Scotland’s Catriona Matthew, the 2009 Champion commented, “The Ricoh Women’s British Open will be the pinnacle of the summer for all of us and seeing the marketing material going out makes me realise it isn’t too far away. I have fantastic memories of playing in the Curtis Cup match at Hoylake in 1992 and I really am looking forward to playing in my first professional tournament there. Having won just down the road at Royal Lytham & St Annes, I can’t wait to return to the North West and I am hoping for a really great week and, if at all possible, a repeat of my performance in 2009.”

Michelle Wie, who graduated from Stanford last weekend added, “I have a couple of months to get my game in great shape for Royal Liverpool and I will be working extremely hard and  getting all the advice I can from my coach David Leadbetter as to how best to tackle this famous course.”

Shona Malcolm, the LGU’s CEO added, “We already have a wonderful array of the world’s best women golfers entered for this year’s Championship.  Once again we are set to have the most international field of all the majors along with an extremely strong contingent of home players. With the added intrigue of tackling the historic course at Hoylake for the first time, we are looking forward to a fantastic Championship in September.”

This year fans will again be able to watch the BBC’s extensive coverage of the Ricoh Women’s British Open in HD (high definition) underlining the significance of the Championship in the BBC’s sports portfolio.

Ricoh, the leading technology provider of Managed Document Services and Production Printing, has been the title sponsor of the Ricoh Women’s British Open since 2007.