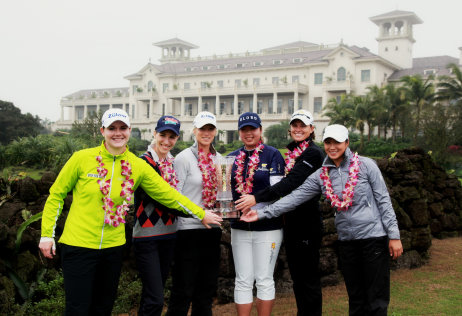 Ladies European Tour players gave a resounding seal of approval to Mission Hills Haikou during their first visit for the inaugural World Ladies Championship from March 2-4.

Australian Frances Bondad, who won the 2011 Sanya Ladies Open in Hainan Province in October, said that the resort, which boasts 10 courses set amid a volcanic tropical landscape, was ‘a golfer’s paradise’ while Germany’s Caroline Masson said the venue was ‘pretty awesome’.

England’s Melissa Reid gave the resort her vote of confidence, describing it as, ‘massive’ while Italian Diana Luna agreed with her description: ‘huge and very nice!’

South African Lee-Anne Pace, who won twice inChinaduring a phenomenal 2010 season, when she earned five titles around the world, was also full of praise. ‘It’s absolutely amazing. From the first time I stepped into the hotel room to the practise tee, everything is absolutely fantastic,’ she said. ‘I can definitely see this becoming a key event on the women’s tour calendar. I like playing inChina, I like coming toChinaand like the people so feel very much at home here.’

Chinese number one Shanshan Feng, ranked 12th in the world, played at the venue two years ago in the Mission Hills Star Trophy 2010 when she was grouped with the American actor Christian Slater and she commented: “It’s fantastic.”

Located in Haikou, which is Hainan Island’s capital city, all 10 golf courses at Mission Hills Haikou are strewn with black lava rocks. Standing on the volcanic golf courses, you can view a horizon of lychee trees and serpentine lava walls.