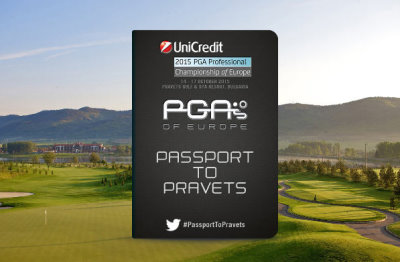 The 2015 UniCredit PGA Professional Championship ‘Passport To Pravets’ campaign is underway as the Championship is confirmed to take place from the 14 – 17th October 2015 at Pravets Golf & Spa Resort, Bulgaria.

“We are very excited to be launching the fifth edition of the event since it was re-launched in 2011,” said PGAs of Europe Chief Executive, Ian Randell.  “Our key individual event continues to grow in stature year on year and with the fantastic support of UniCredit Bulbank and the team at Pravets we are looking forward to once again seeing the best PGA Professionals from across our membership compete for a prize fund of €60,000 and the prestigious title.”

The Championship is the Association’s only full 72-hole individual strokeplay tournament and is the flagship event of a now 12 event-strong tournament calendar, the most comprehensive in the PGAs of Europe’s 25-year history.

11 PGAs already have their qualifying events in place, and when complete, the leading players will qualify to compete at the Championship.

Along with the qualifiers from Member Country PGAs, the Championship will this year come with the added boost that the ‘Passport to Pravets’ banner provides – each of the eligible winners from the other PGAs of Europe Championships and Sanctioned Events on the calendar will also qualify to compete.

PGA Professionals can contact their PGA to find out more on qualifying for the Championship.