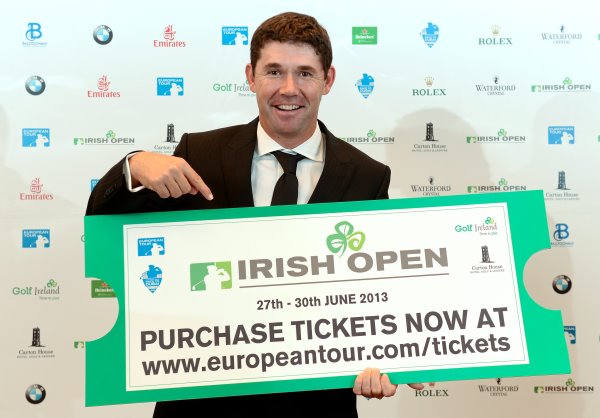 Ireland’s most decorated golfer, Padraig Harrington, has welcomed the return of the Irish Open to the corner of Ireland he calls home next summer.

The three-time Major Champion, enjoying a well-deserved winter break with his family before embarking on his 2013 campaign, took time out  ahead of the annual Excellence in Sport Awards ceremony in Dublin to wish the tournament promoters, sponsors and venue – Carton House – good luck for next year’s event to be held from 27-30 June.

Harrington, who captured the title in 2007 ahead of his breakthrough Major victory that year in The Open Championship at Carnoustie, is relishing the resumption of world class professional golf in his own backyard after an absence of six years.

Advance tickets for the 2013 tournament, to be played over the par-72 Montgomerie Course at Carton House near Maynooth, Co. Kildare, are now on sale and Harrington is confident that the Irish Open’s return to the greater Dublin area will coincide with a huge demand to see the world’s best players in action.

He said: “I am thrilled that the Irish Open is coming back to Dublin next year. As far as I am concerned it is my “Fifth Major” and whilst I thoroughly enjoyed the experience of playing at Royal Portrush earlier this year, as a Dubliner, it’s great to play in my home town and at the same time build on the success of this year’s tournament in the North.”

Harrington finished tied fifth behind Welshman Stephen Dodd over the Montgomerie Course in 2005 and 11th a year later as Denmark’s Thomas Björn took the title, before triumphing himself at Adare Manor in 2007.

The 2013 tournament will be played on the Montgomerie course. The Mark O’Meara course had been the subject of some recent course improvements, with the addition of a new first and 18th holes, but the Golf Club owners and The European Tour opted for the ‘Monty’ which successfully hosted the European Amateur Championships in August.

Managing Partner Conor Mallaghan commented: “We are in the very fortunate position of having two championship golf courses at Carton House but with the recent construction development of the two new holes on the O’Meara and knowing how unpredictable Irish weather can be we have decided that the Montgomerie course is the sensible option for 2013.”

Following the record-breaking Irish Open at Royal Portrush in June, The European Tour is looking forward eagerly to the 2013 edition and the opportunity to recreate the popularity of the event in front of equally huge crowds at Carton House.

Already, in addition to long-time partner and major supporter, Fáilte Ireland, many of the tournament sponsors from 2012 have committed to the 2013 event and Irish Open Commercial Director James Finnigan said: “Fáilte Ireland have played an enormous role in the success of the Irish Open in the past and we are indebted to them for their long-term commitment. We are delighted to confirm that we will again be partnering top quality brands such as, Ballygowan, BMW, Emirates, Heineken, Moy Park, Rolex and Waterford Crystal next year. It all points to a great return to Dublin for the Irish Open.”

It will not only be golf that will be celebrated during the weekend of the Irish Open, thanks to an exciting new initiative between The Curragh racecourse and The European Tour.

As part of the Irish Open ticket campaign, fans of golf and horse racing can enjoy both sports on the same day – Saturday, 29 June – by purchasing a specially priced ‘Irish Double’ ticket to enjoy the third round of the Irish Open and the Dubai Duty Free Irish Derby Day for a combined price of €50.

With the Irish Derby being held on the Saturday evening, the cross ticket promotion offers sports enthusiasts a superb day of live sport. Antonia Beggs, the Irish Open Championship Director, said: “We engaged in a successful collaboration with The Curragh during The Ryder Cup in 2006 when a special raceday was held for the wives of the European and United States Teams. Consequently, we got together with The Curragh to try to create an unforgettable sporting weekend combining world class golf and world class horse racing.”

Meanwhile, golf fans can now purchase tickets to what promises to be another thrilling Irish Open at discounted prices before the New Year.

A season ticket for all four days can be bought for €60 before 31st December, a saving of €10 on next year’s pre-tournament prices and €20 on admission at the gate.

Concessions (60 and over) start at €40 for a season ticket and €15 for any one day tickets if purchased this year. Under-16s accompanied by an adult are admitted free of charge and all car parking is also free.

Reserved grandstand seating can also be purchased immediately for Thursday, Friday and Saturday (€10) and the Sunday (€15) of the event. No concessions of other discounts apply.

Corporate Hospitality packages are also available with prices ranging from €245 to €295 (plus VAT). For all enquiries please contact Joanne in CSL Hospitality on 01 676 6650 or joanne@cslhospitality.ie  For further information please visit www.cslhospitality.ie