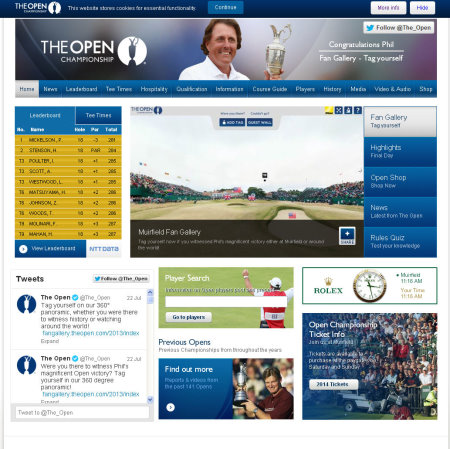 Although attendance on the Practice Days this year was 31,320, slightly up on the 30,862 who attended in 2002, attendance on each of the four days of The Championship was down on the equivalent day in 2002, the last time The Open came to Muirfield and Ernie Els was Champion Golfer of the Year.

Among the reasons given to explain this result are not only the higher cost of a day ticket – £75 compared with £60 two years ago – and the abolition of the concessionary price for over 65s, but also the high cost of accommodation in the area, with hotel owners for miles around (including Edinburgh) massively inflating their normal prices in the hope of making a killing.

Neither of these theories was mentioned by the R&A, however, whose spokesman said: “More than 142,000 people attended The Open this week. That is almost 90% of the figure in 2002 and we are pleased with this attendance. Advance ticket sales were very strong and we believe the extremely warm weather put off some of our pay at the gate customers. That is perhaps why, unusually, we had a higher attendance on Sunday in cooler weather than we did on Friday which is normally the busiest day. The blend of a British winner of the Tour de France and Ashes cricket on television over the last few days may also have had an impact.”