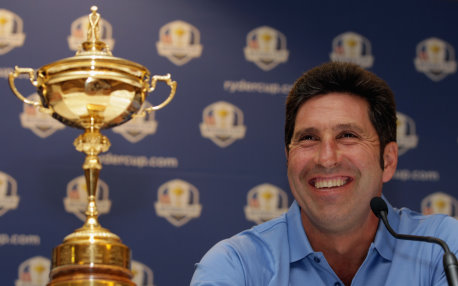 José Maria Olazábal kick-started Ryder Cup year by revealing that he would announce his two Captain’s picks on the Monday following the Johnnie Walker Championship at Gleneagles.

Olazábal will announce his two picks on 27 August at The Gleneagles Hotel to complete the 12-man European Ryder Cup team who will travel to Medinah Country Club,Chicago,Illinois,USA, to defend the trophy against theUnited Statesfrom 28-30 September.

When Colin Montgomerie announced his wild cards shortly after the dramatic conclusion to the 2010 Johnnie Walker Championship at Gleneagles, some players under consideration – notably Luke Donald, Padraig Harrington, Paul Casey and Justin Rose – were competing inAmerica. Donald and Harrington received the news they were in the team while Casey and Rose missed out.

Olazábal, speaking at his first official Ryder Cup conference of the year, ahead of the Abu Dhabi HSBC Golf Champions, said: “I talked about it with George O’Grady and with the team, and I think the scenario last time was a delicate one, obviously for the captain and also for the players playing in the States.

“We have made the decision regarding that, and the announcement is going to be the Monday following Gleneagles. So we are going to wait until whatever happens in the States before we make the decision.

“Looking at it when it happened, it was not a comfortable situation for anybody. Anyone playing in the States, who might be on the verge of winning and changing his chances of being in the team – it would be completely unfair to name those two picks before the guy even tees off.

“When it gets close to making the final decision on who is going to be on the team just three weeks from The Ryder Cup, I would like to have an eye on the players who are hot at that time. So if a player wins, it means that he’s on top of his game.  So it would be a good idea to have a thought about him.”

Olazábal was unveiled as European Captain for the 2012 match exactly 12 months ago and is relishing the role as the biennial encounter draws ever closer.

“It’s one year since I was named Captain of The Ryder Cup for 2012,” he said. “Time flies, especially when you get a little bit older, it seems to fly a little bit quicker. I’m just happy to be here. It is only eight months to go for The Ryder Cup.”