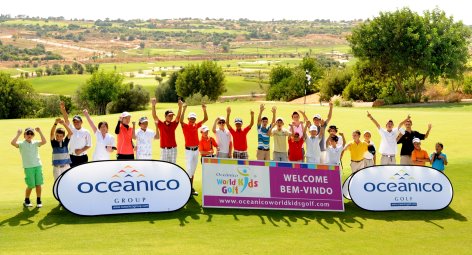 The highly successful Oceânico World Kids Golf Championship (OWKG) is back and looks set to be bigger and better than ever before in 2012. Hosted in the Algarve’s glorious summer sunshine, the Oceânico World Kids Golf Championship will welcome young golfers from all over the globe as they test their skills over two of Oceânico’s stunning championship courses; the Oceânico Faldo and Oceânico O’Connor Jnr courses at the Amendoeira Golf Resort from the 23rd-27th July.

The OWKG continues to have the unwavering support of the Portuguese Golf Federation and several other European leading golf federations. Its burgeoning reputation has caught the imagination of the stars of tomorrow by spanning the world of golf and welcoming entries from as far afield asAsia. The Championship will see competitors compete over the critically-acclaimed Oceânico courses, which also host several high profile professional events.

With a variety of age groups for boys and girls between the ages of seven and eighteen, competition categories are determined by both age and gender, producing a Championship as comprehensive as any on the golfing calendar. Kids aged ten years and over will compete over 18 holes on each of the three competition days, while children under ten will play 9 holes. Creating the feel of a professional ‘Tour’ event the tournament counts each player’s gross score towards their Championship total and prizes will be awarded to the first three competitors in each age category, for both boys and girls.

“We’re excited about the fourth successive Oceânico World Kids Golf Championship, which will be our biggest and best to date. It’s a great concept that welcomes young golfers from around the world to enjoy a competitive event, which is fun-filled and enjoyable for all the family. Sign up’s so far have been overwhelming and I strongly encourage those who haven’t done so already, to do so soon to avoid disappointment,” commented Chris Stilwell, Oceânico Golf’s CEO.

The tournament once again demonstrates Oceânico’s dedication to supporting golf across all levels of the game from grass roots during the Oceânico World Kids Golf Championship to the world’s elite Touring Professionals during the European Tour’sPortugalMasters. As the Kids Championship grows in stature year on year, Oceânico continues to build on a reputation for being one ofEurope’s most complete family friendly venues.

The 12th Asia-Pacific Amateur Championship (AAC) is to be held at Dubai Creek Golf & Yacht Club in Dubai, United Arab Emirates from November 3-6, 2021.