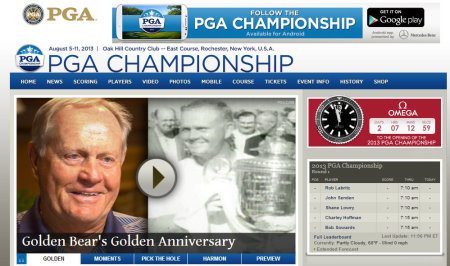 Oak Hill Country Club Manager of Golf Courses and Grounds Jeff Corcoran says there is nothing tricky about its East Course, site of the 2013 PGA Championship, 8-11 August in Rochester, N.Y.

But he is quick to point out that pinched-in fairways and thick rough can be enough to spook even the world’s top golfers. Playing at a distance of 7,163 yards and featuring a Mother Nature-enhanced rough, the word for the week is likely to be “long.” Long as in distance, long as in the height of rough and long as in the day if the participants do not play from the fairway.

“This is a classic championship course,” the 17-year GCSAA Class A member says. “Everyone, from the membership to the maintenance staff, is wired to host high-profile tournaments. We’re excited and right where we want to be at this point.”

Getting to this point has not been easy, however. It all began October 30 of last year when Hurricane Sandy struck, dumping heavy rain and downing a handful of large trees. Since late May, periodic heavy rains forced Allen’s Creek to flood five times. There were record rainfall totals for both June and July, including a 30-minute deluge on July 3 that put 2.15 inches of water on the course. It required 150 tons of sand to repair the washed-out bunkers.

“Let’s hope Mother Nature is tired out and takes it easy on us from now on,” the Groton, N.Y., native says. “All that rain really thickened up the rough. Now we want to be dry so we can control the firmness of the course.”

Corcoran, who earned an associate’s degree from SUNY-Cobleskill in 1993 and a bachelor’s degree from PennState in 1995, is well-versed in the lore and nuances of Oak Hill. Although he turned 40 in May, he has been on the scene for nearly 20 years as an intern, assistant and now head superintendent (he was the superintendent at Weston [Conn.] Golf Club from 2000-2003). He has been in charge of maintenance operations at Oak Hill since 2003.

The Donald Ross design of 1926 has not undergone extensive changes in recent years. In 2011, the 5th, 6th and 15th greens were changed slightly, with various landing areas narrowed. The most noticeable change was to the par-3, 181-yard, downhill 15th hole that Tom Marzolf of Fazio Design and McDonald & Sons Builders conspired to change. The bunkers on the left of the green were reshaped, the left-to-right slope of the green was lessened and the water on the right-hand side, which used to be 4 to 5 feet from the edge of the green, was brought right to the edge.

“I think the tournament could turn on the last four holes,” Corcoran says. “Nos. 15, 17 and 18 will be tough, but No. 16 is a scoring opportunity. So how they approach them will be important. There is opportunity, but there is also risk.”