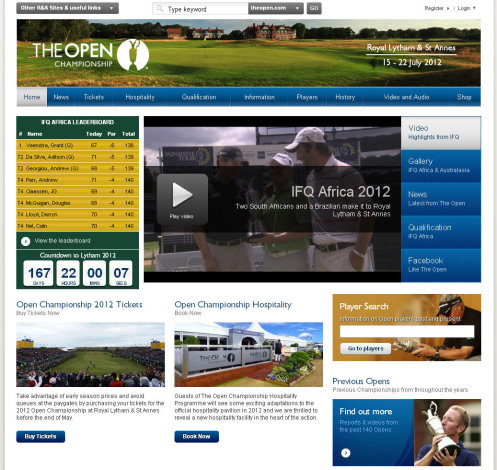 An independent study commissioned by Open Championship organiser, The R&A, forecasts that this year’s event, to be staged at Royal Lytham and St Annes Golf Club, will deliver a total economic benefit close to £90m to the regional economy of the North West of England

The headline figure includes a forecast economic impact of £35.1 million and a destination marketing benefit of £52.6 million gained through global television exposure of the week-long event (15-22 July 2012).

Researchers at the Sport Industry Research Centre at Sheffield Hallam University base their economic impact forecast on 185,000 spectator admissions and the established spending pattern of players, the media, event staff, sponsors and organisers measured over the last two championships.

Commenting on the research findings, R&A Executive Director – Championships, Johnnie Cole-Hamilton said: “The Open Championship comes to England’s Golf Coast to provide the best players in the world with a true test of golf and it is good to know that we also bring an important financial boost to the host economy.”

Commenting on the wider legacy of The Open Championship, Lancashire County Council Chief Executive, Phil Halsall said: “The Open this year will be the Championship’s third visit to theNorth Westin just seven years. In hard times the cash injection that comes with hosting the event can make a real difference to the economic outlook of the region.”