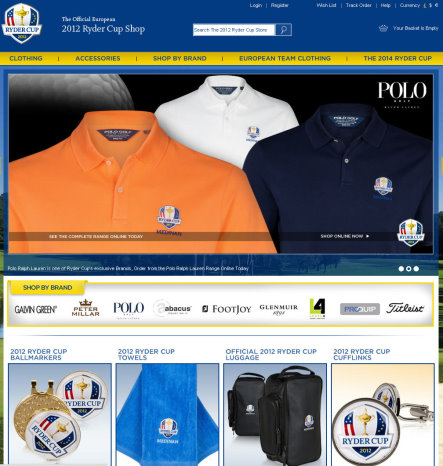 Fans can be part of The Ryder Cup experience through the two Ryder Cup collections –   the Official Collection and the Exclusive Collection – which are both now available via the official Ryder Cup online shop, www.rydercupshop.net

The Official Collection contains a wide choice of apparel, gifts and merchandise, from licensees Abacus, Adidas, Baxter Golf Art, Druh Belts, Footjoy, and Titleist, along with Glenmuir, Level 4 and Pro Quip, who are also Preferred Suppliers to The 2012 European Ryder Cup Team.

Kitbag has once again been chosen to host The Ryder Cup online shop, www.rydercupshop.net , which now features all of the Official Licensees, complete with The 2012 Ryder Cup Logo. The collection featuring The 2014 Ryder Cup logo will be available later this year.

European Ryder Cup Director Richard Hills said: “We are delighted to be able to unveil the two new Ryder Cup collections, allowing golf fans the chance to buy their merchandise ahead of September’s matches.

“With just three months to go until Medinah, we are all looking forward to The 2012 Ryder Cup and by visiting our online shop, you can reserve you official merchandise now.

“Our thanks go to all of the Official Licensees and Kitbag, for helping to create the two outstanding collections.”

José Maria Olazábal’s European Team will attempt to retain The Ryder Cup when they take on the United States at Medinah Country Club, Chicago, from  28-30 September.