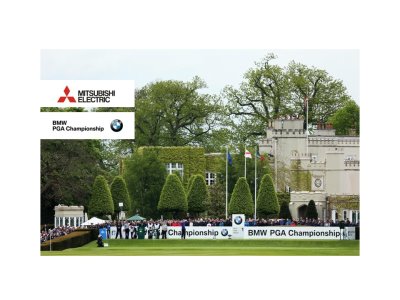 Mitsubishi Electric, a global leader in the research and manufacture of electrical and electronic equipment, has announced its official partnership with the BMW PGA Championship.

The 60th edition of The European Tour’s flagship event will take place at the Wentworth Club, in Surrey, from 22-25 May.

Mitsubishi Electric will be the official Cooling and Heating partner of the event and, as such, the company joins Rolex, Emirates, DP World and Hugo Boss as one of the tournament’s marquee partners.

Mitsubishi Electric will have branding on key holes around the course and a variety of hospitality opportunities, and representatives will also participate in the Pro-Am, held on the eve of the tournament on Wednesday May 21.

Kei Uruma, Mitsubishi Electric Europe CEO, said: “We are very excited about our new partnership with the BMW PGA Championship, which gives us a fantastic opportunity to showcase our brand to a huge audience, both at the course and watching on television.”

Jamie Birkmyre, Championship Director of the BMW PGA Championship, said: “We are absolutely delighted to welcome such a well-respected and established brand as Mitsubishi Electric to our family of sponsors, and we look forward to growing our partnership with them in the coming years.”

Italian star Matteo Manassero will defend his title at the BMW PGA Championship, which this year celebrates its 60th edition and the 30th to be held at the iconic Wentworth Club in Virginia Water, Surrey.

The length of time that today's Tour Professionals are required to spend travelling and way from family and friends is leading to loneliness and relationship difficulties, a new research report has found.

The PGA TOUR and the golf division of Perry Ellis International have extended their apparel partnership for a further four years.

The European Tour is to return to Belgium next season with the staging of the Soudal Open in May or June 2022.