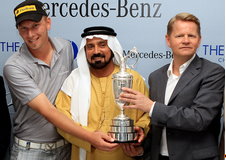 Mercedes-Benz has become a Patron of The Open Championship becoming the Official Car of golf’s oldest and most international major.

Mike Tate, Director of The R&A, said: “We are delighted to welcome Mercedes-Benz as a Patron of The Open Championship. It has established itself as a great supporter of golf worldwide. Mercedes-Benz are renowned for their commitment to quality and their brand is recognised the world over, all of which complements perfectly the prevailing characteristics of The Open.

Mercedes-Benz is the “Official Car of The Open Championship”. The company will provide the exclusive chauffeur service at the major championship and together with The R&A will also provide communications support for the entire tournament.

“For our brand, this association is not only an excellent platform but also a great honour. With our commitment to this event, we very much look forward to being able to promote the close ties between the sport of golf and Mercedes-Benz even further on a global basis”, said Wilfried Steffen, President and CEO of Mercedes-Benz United Kingdom.

Mercedes-Benz has been involved in the professional sport of golf since the 1980’s. From 1990, it also took over as title sponsor of the Mercedes German Masters, the first professional golf tournament in Germany featuring international participation. In addition, the premium brand from Stuttgart was also title sponsor of the Mercedes-Benz Championship in Cologne from 2007 to 2009 and Hawaii from 1999 to 2009.