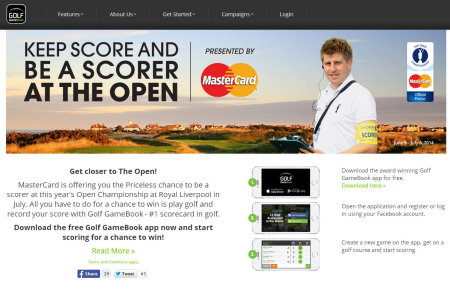 Golf GameBook, the free smartphone app featuring a golf community, live scoring, tournament manager and social chat, has announced a partnership with MasterCard to activate the company’s ‘Keep Score and be a scorer at The Open’ competition which culminates in two winners becoming official scorers at this year’s Open Championship at Royal Liverpool in July.

The mobile contest is organised to support and communicate MasterCard’s Official Patron status of the 143rd Open Championship and gives UK golfers the once-in-lifetime chance to become a scorer for one of the marquee groups.

To participate, golfers simply download the free Golf GameBook app on their smartphone and keep score with it during any round of golf. The mobile contest will be played during four weeks, starting on 9th June and running until 6th July.

Mikko Rantanen, Co-Founder and CEO of GameBook Inc., said: “This is a fantastic opportunity for someone to experience the world’s oldest professional golf tournament like never before. Each round played with GameBook gives one entry to the mobile contest, so the more a golfer plays, the better their chance of winning.”

Richard Helik from Edinburgh was the eventual winner. He commented: “It was a phenomenal prize. Scoring at The Open Championship was one of the best experiences of my life. I just want thank everybody from MasterCard for making this chance possible.”

Shaun Springer, Head of Brand, Sponsorship, Digital & Music Marketing at MasterCard UK & I, said: “MasterCard is delighted to support The Open Championship once again, in what is our 3rd year as a Patron. Building on the success of last year’s official scorer competition, it is exciting to bring this back for The Open 2014 and to partner with Golf GameBook to reach out to golfing enthusiasts all over the UK.

“To offer an amateur golfer the chance to ‘be an official scorer’ at The 2014 Open Championship is just one of the many priceless experiences we will be bringing to consumers ahead of and during the tournament itself.”

For further information about the ‘Keep Score and be a scorer at The Open’ contest visit  www.officialscorer.co.uk

For further information about MasterCard’s involvement with The Open visit: http://www.theopen.com/mastercard