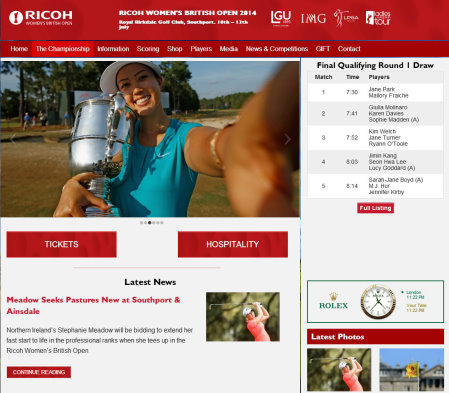 The popular 24-year-old claimed her first Major title at Pinehurst on Sunday, winning by two shots from the 2013 Ricoh Women’s British Open Champion, Stacy Lewis, and adding to her haul of three LPGA titles.

Wie, who won the amateur medal in 2005 on her debut at the Women’s British Open, finishing tied third said, “I am so happy to have won the US Open and I am definitely going to spend a few days savouring the feeling of winning my very first Major. But then I will get down to work seriously preparing for the Ricoh Women’s British Open at Royal Birkdale which is one I have been looking forward to all year.

Wie continued, “There is something so special and unique about the Ricoh Women’s British Open – I love the fact we play on all the famous Open courses and everything feels so steeped in history.   I think my game really suits links golf and obviously David Leadbetter, my coach, has helped me so much with all his experience and advice.”

Wie concluded, “I had my best finish in the Women’s British Open at Royal Birkdale so I know it suits my game and I have some really great memories of playing there. I’ll be heading over there with really high expectations, especially now I’ve proved to myself I can get over the line. It will really be something to be announced on the tee as the US Open Champion.”

Wie, now ranked seventh on the Rolex Rankings, will be one of the stars headlining the field next month at Royal Birkdale and is sure to be a crowd favourite. With final qualifying still to come there are currently 23 nationalities represented, with a combined 46 Major Championship titles between them and over 700 international tournament titles.

The 39th Championship takes place in the week preceding the Open Championship, marking the start of a veritable feast of golf allowing golf fans to watch both the best female and male golfers in the world in a golden fortnight this summer.

Tickets can be purchased via the event website with discounted offers due to end shortly.

Ricoh is a global technology company specialising in office imaging equipment, production print solutions, document management systems and IT services has been the title sponsor of the Ricoh Women’s British Open since 2007.