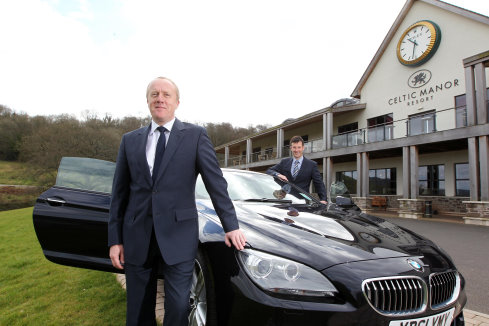 The touring golf professionals won’t be the only ones demonstrating impressive drives when the ISPS Handa Wales Open tees off at Celtic Manor this summer.

Luxury car dealerships Sytner Cardiff and Newport BMW have just signed up as Official Sponsors for the tournament and will be providing the courtesy cars to shuttle the star players across the resort.

Golfers and tournament officials will be transported in style from the hotel to the Twenty Ten Clubhouse and Course, which provided such a memorable stage for The Ryder Cup in 2010.

One of the premier events on The European Tour with a brand new title sponsor this year, the ISPS Handa Wales Open from May 31-June 3 will feature many of the world’s best players. It takes place just a week after The European Tour’s flagship BMW PGA Championship at Wentworth Club.

Keith Farrell, Dealer Principal of Sytner Cardiff BMW, said: “We are delighted to associate our prestige brand with the ISPS Handa Wales Open, which has grown into one of the biggest events of Wales’ sporting summer.

“We are a performance-orientated and innovative brand so there is no better fit than the sport of golf which continually sets new standards. We also look forward to establishing a long-term relationship with a venue of the quality of the Celtic Manor Resort.”

Nigel Murphy, Sponsorship and Commercial Manager at The Celtic Manor Resort, said: “We’re delighted to have Sytner Cardiff and Newport BMW on board as Official Sponsors to the ISPS Handa Wales Open.

“Players often comment on how well they are looked after during the tournament and how much they enjoy using all of our facilities – the spa, the health clubs and the restaurants. The addition of BMW courtesy cars will only enhance that overall experience and provides another example of the growing stature of this event.”

Further packages are available to become an Official Sponsor or a Patron Sponsor at the ISPS Handa Wales Open. For more information, call Sponsorship and Commercial Manager Nigel Murphy on 01633 410318.

The ISPS Handa Wales Open strives to offer visitors more than just a golf tournament and one of the largest hospitality pavilions on The European Tour is complemented by a tented village of attractions for all spectators to enjoy.