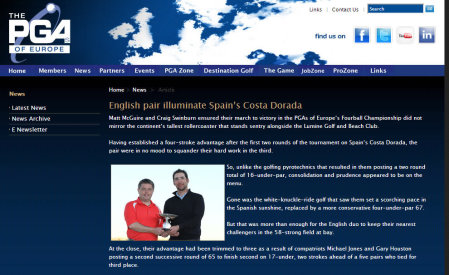 The championship will be expanded to be played over two of the fantastic courses at Lumine Golf Club, enabling up to 120 pairs to compete in the popular better-ball event that provides the ideal chance of some welcome springtime competition for PGA professionals. The event will take place over 54 holes with a cut after 36 holes, with the final 18 played out over one course.

Calle Carlsson, General Manager of Lumine Golf Club is delighted that the event will be returning once again to the flourishing Spanish destination and said: “This event and our partnership with the PGAs of Europe are part of a long-term strategy that involves welcoming key influencers to experience our magnificent offering at Lumine, so naturally we are looking forward to welcoming the competitors once again. In 2012 we witnessed a thrilling finale over the Greg Norman designed, Lumine Lakes Course that confirmed our credentials as an up-and-coming championship destination.”

Under the management of Troon Golf, Lumine Golf Club is one of Europe’s most vibrant new golfing destinations. The impressive 45-hole facility offers a perfect combination of championship golf, luxury accommodation, modern Mediterranean cuisine and first-rate leisure facilities, which can be easily accessed via the nearby Reus airport or a 45-minute drive from Barcelona International Airport.

Located on 170 acres, Lumine Golf Club’s three courses are spearheaded by The Lakes Course, a links-style championship course designed by golfing legend Greg Norman that features several water hazards that wind around the Sèquia Major wetlands. The Hills Course, Lumine’s second championship course runs through white pine trees and offers spectacular views of the nearby coastline. Completing the golf offering is the 9-hole Ruins Course, another Greg Norman design, uniquely laid out amongst Roman archaeological remains from the second century BC.

The 2012 Fourball Championship was won by English pair Matt McGuire and Craig Swinburn in the championship’s first year at Lumine Beach & Golf Club, posting a 20-under-par total to take home the winner’s cheque for €4,500.