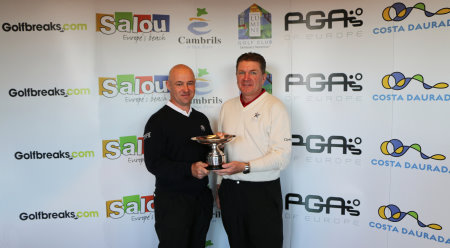 “This is our third year at Lumine Golf & Beach Club now and we could not be happier with the relationship we have established with this fantastic golfing facility,” noted Ian Randall – Chief Executive of the PGAs of Europe. “The tournament continues to go from strength to strength, thanks to two golf courses presented in immaculate condition, warm hospitality and the dedicated support of Calle and his team; all of which make this one of the most eagerly anticipated events in our calendar year.”

Supported by Costa Daurada tourist board, as well as the local tourist offices of Cabrils, Salou, and La Pineda Pinja the event has grown in stature year on year.  Attracting additional sport from leading tour operator Golfbreaks.com, the eventual winners were presented with the largest prize fund to date – €6,000.  With as many as 962 European Tour appearances between them, the duo finished on a total of 18 under par, 196in the better-ball format played over Lumine Hills and the GregNorman-designedLumineLakes courses.

“I’ve had a really nice time – the facilities here are fantastic with two good golf courses.  It was just a good tournament with a good prize fund, sponsors, etc. – you can’t ask for more,” commented Coles.

Partner Broadhurst continued; “The greens putted great – I haven’t putted on decent greens for months so it was beautiful and it was nice just to see the ball roll.  We’ve had a great time across two testing golf courses and a testing day with that wind and we’ll be coming back next year…if he’ll have me…!”

PGA of Europe Fourball Championship competitor and Lumine Golf & Beach Club General Manager Calle Carlsson commented: “This has been a great start to the 2014 events season at Lumine Golf Club, developing our existing relationship with the PGAs of Europe who return not only because of our world-class facility, but also to enjoy the service that befalls our valued guests on a daily basis. Congratulations from all the team to Paul and Robert on a fantastic performance!”

Elsewhere on the calendar the championship destination will welcome the inaugural Nordea Tour event to be held outside the Nordic region. From February 21st – March 2nd 2014 up-and-coming Nordic professionals will compete in a hotly contested Winter Series that forms part of a circuit that is a Satellite Tour to the European Tour.

One of Europe’s most diverse golfing destinations, LUMINE Golf Club includes the Greg Norman designed Lakes Course which also plays host to the European Tour Qualifying School Stage 2 and the more traditional Hills Course which runs through pine and olive trees with spectacular views of the nearby coastline. The two championship courses are further complimented by the aptly named 9-hole Ruins Course, another Norman design that weaves its way through Roman archaeological remains completing the diverse 45-hole offering of immaculately presented facilities that caters for golfers of all ages and abilities.

The region’s capital, Tarragona, is home to some of the best restaurants in the Costa Daurada while LUMINE’s Beach Club, situated above the Playa Del Llarga bay, is fast becoming one of the most fashionable venues. Set within the pine-clad hillsides, the Beach Club is also home to the award-winning LUMINE Restaurant where head chef Eduardo Cuesta has already become somewhat of a legend in the area.  Combined with 7km of golden sandy beach, the Costa Daurada also provides golfers the perfect setting for relaxation and indulgence after a round.