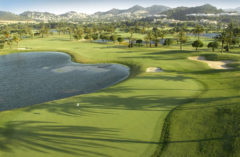 Región de Murcia has underlined its serious commitment to staging The 2015 Solheim Cup after it emerged La Manga Club resort is the only venue bidding to bring the event to Spain.

Following Andalucia’s withdrawal from the bid process, both the Murcia and the five-star resort have demonstrated a strong political and financial commitment to staging the biennial match between Europe and the United States.

The venue and region as a whole are synonymous with golf and ahead of this summer’s announcement La Manga Club has outlined the level of its support in its bid to host the 14th edition of the transatlantic match, while the region has committed to hosting tournaments on the Ladies European Tour for the next 10 years.

Región de Murcia is gearing up to focus its tourism strategy around the event in the years leading up to and including 2015.

The Ladies European Tour’s director of operations and The Solheim Cup, Mark Casey, was keen to acknowledge the strength of the bid. “We would like to recognise the extremely strong political and commercial support of Región de Murcia in its bid to host The 2015 Solheim Cup and for responding so professionally and diligently to the bidding criteria. We are looking forward to reviewing all the bidding parties over the coming month and considering their individual commitments to the project,” he said.

Pedro Alberto Cruz, regional minister of tourism, culture and sports of the Murcia region said: “As a region we are committed to bringing The Solheim Cup to Murcia and will do everything in our power to deliver an outstanding event. It will be a huge boost to the region’s economy and re-affirm Murcia and La Manga Club as the best place to play golf in Europe.”

Jose Jover, president of Murcia Golf Region, said: “Murcia already hosts one of the Ladies European Tour’s biggest events with the annual qualifying school at La Manga Club and now we are committed to welcoming the cream of women’s golf back to the wider region. Murcia is one of the finest golf destinations in the world, with outstanding flight connections from across Europe, and La Manga Club is the perfect venue for an event of this magnitude.”

Antonio Ros, general manager of La Manga Club, said: “La Manga Club has hosted numerous prestigious events throughout the years and we’re dedicated to making sure The Solheim Cup will be added to those. As a resort we are huge supporters of ladies golf and know we have the infrastructure and courses to ensure a first-class event for both competitors and spectators.”