Matt Kuchar is back to defend his Hero Challenge title after confirming he will tee it up for the second time in the fast and fun night golf contest, hosted at The Renaissance Club tomorrow (Tuesday July 9), during the week of the Aberdeen Standard Investments Scottish Open. Fans can register for FREE tickets to the thrilling one hole shoot out HERE.

Kuchar will defend his title against Hero Challenge debutant and two-time European Tour winner Lucas Bjerregaard, and the returning Matt Fitzpatrick, who played in his first Hero Challenge in 2017. 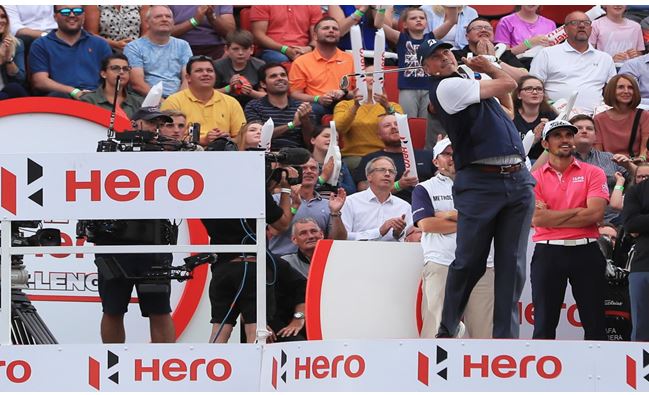 The trio join Major winners Graeme McDowell and Justin Thomas and 2018 Ryder Cup star Tyrrell Hatton in the exhilarating event, which will be held in the stunning surroundings of the par three 15th hole at the Tom Doak-designed Renaissance Club.

Kuchar, who currently leads the US PGA Tour Rankings made his first Hero Challenge appearance ahead of last year’s Aberdeen Standard Investments Scottish Open, defeating compatriot Charley Hoffman in the final. The American has enjoyed a strong start to the season in the United States, winning the Sony Open in Hawaii and recording two additional runner-up finishes.

He will be reunited with Dane Bjerregaard, who famously defeated Tiger Woods in the quarter finals at the WGC-Dell Technologies Match Play earlier this season, going on to finish fourth after facing Kuchar in the semi-finals.

Englishman Fitzpatrick adds further star power to the field and arrives in Scotland after coming close to his sixth title in just his fifth year on the European Tour, finishing runner-up at the BMW International Open last month. The Englishman made his Hero Challenge debut in 2017 ahead of the British Masters at Close House.

Successfully debuting on the European Tour at the British Masters in 2016, spectacular editions of The Hero Challenge then took place at the British Masters, Scottish Open and DP World Tour Championship, Dubai, in 2017 and 2018. Hero MotoCorp Ltd – the world’s largest manufacturer of motorcycles and scooters – has reaffirmed its commitment to innovation on the European Tour by extending this innovative event.

English star Tommy Fleetwood triumphed in the maiden Hero Challenge of 2019 in the week of the Betfred British Masters in May, as the fast-paced shootout returned for a fourth season on the European Tour.

Fans can register for FREE tickets HERE, to see six of the world’s leading golfers battle it out for the second Hero Challenge title of the season at the Renaissance Club.

The Aberdeen Standard Investments Scottish Open once again takes its place as part of the Rolex Series – the premium category of tournaments on the European Tour’s Race to Dubai, each with a minimum prize fund of US$7 million.