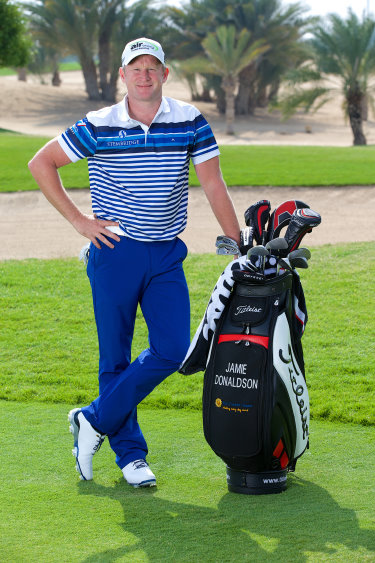 European Tour star Jamie Donaldson will be bringing an added touch of style to the fairways in 2014 after signing an exclusive three-year deal with internationally renowned Swedish fashion house J.Lindeberg.

The world number 25 has agreed a new partnership with the leading Scandinavian clothing firm to showcase its full range of trend-setting golf wear at tournaments throughout the season.

Donaldson has established himself as one of the European Tour’s leading players over the last 12 months and has a real chance to make his Ryder Cup debut at Gleneagles later this year.

Among his many highlights in 2013, the 38-year-old Welshman finished in the top 10 in five of his last six tournaments of the year – including second-place finishes at the Turkish Airlines Open and Nedbank Challenge – to rise to a career-best position in the world rankings.

Donaldson, who also won the 2012 Irish Open at the intimidating Royal Portrush, has long been an admirer of the brand and will be the European Tour standard-bearer for the J.Lindeberg range throughout the year, with the changes in the season’s collections of striking polos, trousers, jerseys, knitwear and accessories reflected in his choice of apparel.

He said: “I’ve always felt that J.Lindeberg’s arrival on the scene was the catalyst for the change in golf’s apparel and the perception of the sport’s clothing in the fashion world. J.Lindeberg made golf gear fashionable with its athletic fits and understated, yet elegant, lines and designs.

“As a professional golfer it’s essential I feel comfortable in my clothes. What’s more the fabrics used in the J.Lindeberg range are technically advanced to ensure my body is at the ideal playing temperature and is not hampered by changes in weather conditions.

“The opportunity to wear J.Lindeberg was one I welcomed, and I very much look forward to working with J.Lindeberg over the next three years.”

J.Lindeberg’s CEO, Stefan Engstrom, added: “At J.Lindeberg, we constantly try to push the boundaries of golf fashion with the most advanced technological developments and the latest fashion design and trends.

“With the assistance and knowledge of our tour players, like Jamie Donaldson, we create collections that give our customers the ultimate golf experience, whether they are pro golfers or amateurs.

“We are extremely excited to be associated with Jamie. His incredible passion for golf, his demeanour, both on and off the golf course and his continued rise up through the world rankings makes it a perfect partnership.”

J.Lindeberg was founded in Stockholm, Sweden, in 1996, with the vision to build an international brand for modern and aware consumers. The Scandinavian fashion house bridges fashion and function, offering outstanding products for a modern, active lifestyle.

The collections consist of menswear and women’s wear offering fashion, tailoring, golf and skiwear. The fashion collections are presented at the international fashion weeks in, for example, New York, Beijing, London and Stockholm, while the sportswear collections are worn by some of the world’s best athletes.

J.Lindeberg currently distributes to more than 35 countries, and there are close to 90 J.Lindeberg stores and 35 ‘shop-in-shops’ in Stockholm, Copenhagen, Oslo, Munich, New York, Los Angeles, Miami, Tokyo, Hong Kong, Beijing, Shanghai and Seoul. J.Lindeberg is sold in more than 900 stores, including the leading high-end department and speciality stores around the world. The company has its headquarters in Stockholm.