Guernsey’s top junior prospects have a new pathway to follow 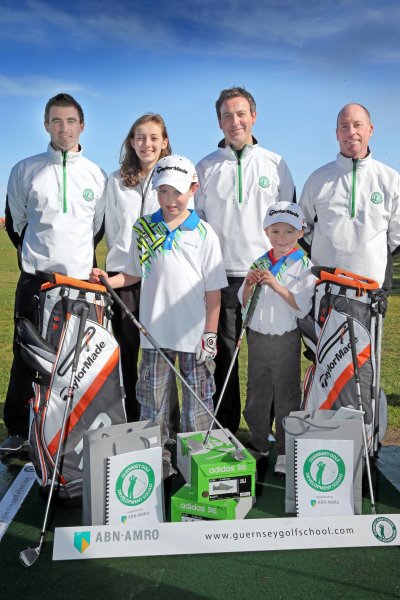 A new initiative has been launched to enable the island’s top prospects to realise their potential fully, reports Gareth Le Prevost of the Guernsey Press and Star. The Guernsey Golf Development Squad was unveiled on Saturday by the Guernsey Golf School, with its purpose to help further develop the elite-player pathway.

It has the support of the Guernsey Golf Union, as well as corporate partner ABN Amro, and will work to the philosophy: ‘To have a complete plan of development for the most talented/promising junior golfers aged between six and 16 in the island and to offer a goal for all young players to work toward becoming involved with’.

Following an 18-month period watching golfers at all the island’s clubs, the initial invitation to become part of the initiative has gone out to 17 youngsters, who will be working with Head PGA Qualified Golf Professionals Phil Sykes and Matt Groves along with a fitness team led by Ashley Carter of the La Grande Mare Gym.

The successful players are being provided with coaching and training sessions free of charge for the duration of their time in the squad along with a complete set of TaylorMade/Adidas custom-fitted equipment and clothing. “We have been watching what’s happening with other sports in the island and that has been fantastic,’ said Sykes, outlining how the Development Squad has come about.

“There have been some young golfers I have seen here in the past who, if they had had this type of pathway available to them, they would have been probably four shots better off. I am hoping we will not lose that type of player now that there’s a plan.

“We want to see as many kids come through as possible. Some could make it onto a tour, some could represent their university or the county. It is about giving them a tool to help them achieve it. It covers all aspects – the swing, the fitness, the mental side, the equipment, everything.”

Sykes added that the basic pathway of giving children an introduction to the sport was already in place through the clubs, but this initiative is designed to take it to the next level. On the playing side of things, an assessment developed by a Swede that is now used all over Europe will be utilised, giving the players different levels to attain and they will have use of the latest V1, Gasp and Flightscope technology.

In terms of tuition, there will be one group session every three or four weeks and one individual one-to-one session with either Sykes or Groves. “We feel that by goal-setting for kids, there is something to aim for. For this as a development group, we will make sure the kids are not put too high too soon,” said Sykes, who also talked enthusiastically about creating the right culture in the group.

He has witnessed first-hand this type of model work in Europe as recently as a trip to Spain this year. “What I loved was one day they all came in and there was one guy who had not played well, but they were not pulling his leg about it, they all looked to help him out.” As for the fitness aspect, Sykes said Carter fitted the bill ‘perfectly’ as he understands the energy requirements, the nutrition and the biomechanics.

Carter himself emphasised that the key is to keep the youngsters motivated. “I will set them individual things with set targets to meet and have a review every four weeks,” he said. “I’ll do a basic nutrition plan for them, encourage people to keep active and have it become part of their lifestyle.”

All the golfers in the Development Squad will be encouraged to play in the new Guernsey Golf Tour, which is using all the courses in the island, and there will also be five places for squad members to play in a prestigious open competition in the UK.

“This is all planned so it fits around what they have to do. We tailor it to fit their golf needs, their school needs and their social needs,” said Sykes. “It’s Team Guernsey and island golf would develop. They go off and play for their own club, but as a group support each other throughout. ‘It’s ever developing. It will grow and grow and grow.”