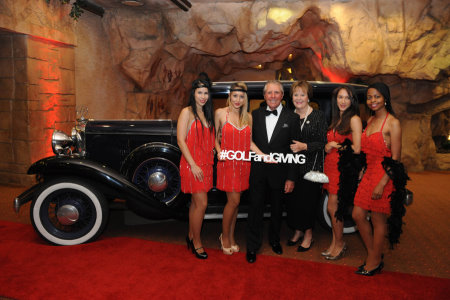 Living up to its billing as the “Union of Golf and Giving”, the Gary Player Invitational, presented by Coca-Cola, raised approximately R3.5 million for charity at a star-studded gala dinner and auction held last Friday (21st November) at Sun City.

The Gary Player Invitational, which celebrates 15 years as Africa’s premier charity golf event, has raised over R600 million worldwide in order to support the various charitable causes supported by The Player Foundation.

This year’s GPI tournament, staged at the Gary Player-designed Lost City Golf Course, features celebrities teamed up with professional golfers and leading business executives all pledging their support in aid of charity. All proceeds raised from the event will benefit charity beneficiaries – Wings and Wishes and the Wildlands Conservation Trust in partnership with Qhubeka.

Golfing icon and tournament host, Player, said he was thrilled with the support shown at this year’s auction.

“It is incredibly exciting and gratifying to see an event like this change the lives of people. The generosity on display last night was just amazing. My great dream is to reach a billion rand raised for charity through The Player Foundation before I retire. And I’m still young, I’m not ready to retire yet,” he said.

The auction’s most sought-after item, an exclusive package to The Masters as a guest of Gary Player and Black Knight International, raised the highest bid for the evening, raking in R 700 000.

“The South African leg of our GPI series is always a fantastic event that produces incredible results in our charity drive,” said Marc Player, Black Knight International CEO and GPI series founder. “We are most appreciative to all our superb sponsors and generous guests who aid in creating a brighter future in South Africa and around the globe.”