Graeme McDowell in Switch to Srixon 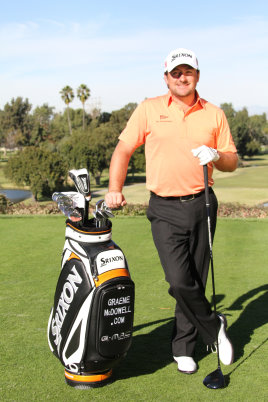 Graeme McDowell’s contract with Callaway has expired and he has agreed a deal with Srixon that is reported to be worth $3million per annum. The US Open champion will play with the Srixon golf ball, wear their hat and glove and, along with his choice of Srixon clubs, use wedges produced by sister company Cleveland.

McDowell’s great start to 2011 has been further enhanced by recognition in the New Year honours. He was awarded an MBE after becoming the first European winner of the US Open since 1970 in June, then clinching the Ryder Cup in the final match at Celtic Manor, Wales in October.

The highly popular Ulsterman, affectionately known as ‘G-MAC’, will feature strongly in the future promotion of the Srixon brand and will help develop both Srixon and Cleveland to a new generation of golfers around the world.

The Company is absolutely delighted to have Graeme as a member of their Tour Staff. A Srixon spokesman said: “Having a world class player such as G-MAC choose to make the switch to Srixon, especially after such a successful 2010 season, not only says a lot about the faith he has in our products, but we know what an excellent Ambassador he will become for our brands.”

McDowell turned Pro in 2002 and has won six times on the European Tour. He represented Northern Ireland in the 2009 World Cup. After his many successes in 2010 he is now ranked as World Number 7.