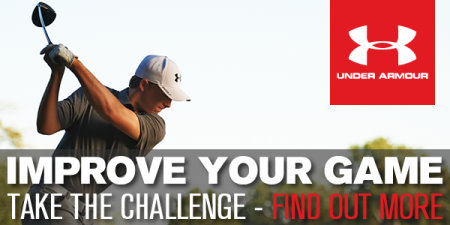 May saw Golfshake.com, Europe’s no.1 stat tracking service available to all golfers, launch their Improve Your Game Summer Challenge powered by Under Armour. The 6 month long campaign will see 10,000’s of golfers across the UK challenged to make 2014 their best golfing year ever by playing more golf and practising more often. Every golfer taking the challenge will be entered into a series of sweepstakes to win some amazing prizes.

Through the use of the Scoretracker system, which benchmarks a golfer’s game and identifies strengths and weaknesses, golfers will be encouraged to set their own goals and targets and challenge themselves this Summer.

“We want everyone to play more golf, practice more often all with aim of improving and becoming the best golfer that they can. We want this to be the season that golfers #GoLow and shoot their best score,” says Darren Ramowski (founder of Golfshake).

Golfers that take part can stand a chance of winning some stunning prizes including, a trip to Royal Lytham with Under Armour for a complete makeover and round of golf with an Under Armour Ambassador, a holiday for two to Cyprus, a trip to the brand new Adams Golf Second Shot Centre at Wentworth GC for a fitting, a lesson with European Tour Coach and Aimpoint’s leading European instructor, Jamie Donaldson and a trip for two to the Elite Golf Coaching Academy in Spain.

Golfshake’s Summer Challenge is being Powered by Under Armour, who believe in helping golfers to improve their games and in the process become the best golfers they can be. As a result the industry leading base layer brand has produced a series of video tips shot with PGA Professionals and Under Armour ambassadors.

The ‘Better Every Shot’ videos were shot at Open Championship venue Royal Lytham & St Annes and focus on the areas of the game golfers most often need to improve.

Along with Under Armour, the Summer Challenge has been supported by Adams Golf, Golfbreaks.com, Teeofftimes.co.uk, Aimpoint and the Spanish based Elite Golf Coaching Academy, all of which have contributed some fantastic prizes to encourage golfers to track their scores and Improve their Games during the summer 2014.