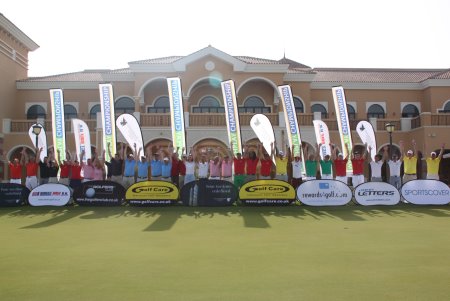 The Golf Care Matchplay Championship, the UK’s biggest amateur golf event, will crown new winners this week as competitors from across the UK and Ireland gather at the world-renowned Els Club in Dubai Sports City, for the third successive year.

The three-day Grand Final showdown is underway and scores have been surprisingly low in the first round, with the players revelling in the heat of the Dubai desert. After entering the tournament for just £30, a diverse array of amateur players are staking their claim for three titles in the Men’s Pairs, Mixed Pairs and Men’s Singles events.

They have all earned their place in the emirate by virtue of their success in several knockout qualifying rounds and a Regional Final last month at European Tour venue, The Marriott Forest of Arden in England.

With TV cameras filming for a Sky Sports production next month, the event is offering some of the UK’s most avid golfers the ultimate opportunity to shine in front of a TV audience, whilst relaxing off the course at the luxurious 5-star JW Marriott Marquis Dubai, the world’s tallest dedicated hotel.

“We’re delighted to be back in Dubai. The hospitality at The Els Club and the JW Marriott Marquis Hotel is truly first-class, I can’t think of anywhere better to celebrate the tenth anniversary of the event. The course is looking immaculate and all the players have praised the condition of it. Chris Brown, Director of Golf, and all his team have done a spectacular job of hosting us for the last three years,” noted John Woosey, Managing Director. “Off the course, Dubai has a whole host of leisure amenities. The players and their families have been taking advantage of away from the course and the hotel is proving a popular place to unwind. With two days of competition remaining, we’re excited to see how it all pans out.”

The tournament was first launched in 2003 and has grown to become the biggest in the UK & Ireland, with thousands of competitors originally teeing it up in the event. Finalists therefore, can be proud of their efforts in getting this far. Live Scoring has been introduced for the first-time and is allowing friends and family to keep up to date with all the action from the course.

Golf Genius Software is providing free guidance for all clubs on getting to grips with managing events under the new World Handicap System (WHS) through a free guide and webinar.