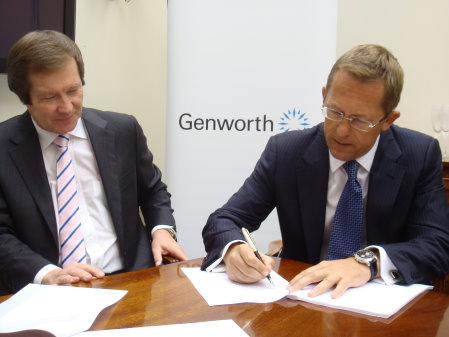 The new deal includes continued sponsorship of the Tour Statistics, with the 2012 season being used to launch an enhanced programme, and involvement with more Tour events. Genworth will be an Official Sponsor at several high profile tournaments in Europe – the Nordea Masters in Sweden, the BMW International Open in Germany and the Madrid Masters in Spain – as well as, for the first time, two in Asia – last week’s Volvo China Open and the Hong Kong Open, reflecting the company’s expansion in that region.

Alongside the European Tour deal, Genworth announced the signing of two new ambassadors, Sweden’s Peter Hanson, fresh from his third place finish at the Masters Tournament, and Spaniard Pablo Larrazábal.

Genworth will also continue the hugely successful Putts4Charity® programme, which is in its sixth year having raised in excess of €865,000 driven by donations from the Genworth Foundation since 2007.

Peter Barrett, Senior Vice President, Lifestyle Protection at Genworth, said: “Genworth is absolutely delighted to be continuing the partnership with The European Tour as Official Statistics sponsor for another four years.

“The European Tour brings us closer to our distribution partners and their customers through the terrific coverage and profile that the sport has. The Tour is very closely aligned with our geographic footprint and we are particularly excited taking our partnership toAsiafor the first time.”

European Tour Chief Executive George O’Grady said: “We are very proud of the successful partnership that we have developed with Genworth over the past five years and are therefore very pleased to agree a new deal that will see this relationship continue to grow and develop.”

Next month's Open Championship at Royal St George's Golf Club in Kent will be able to host up to 32,000 each day following the latest government advice on staging outdoor events.