Garcia and Jiménez complete Hero Challenge line up for tomorrow

Masters Tournament Champion Sergio Garcia and 21-time European Tour winner Miguel Ángel Jiménez are the final players confirmed in the eight-man line up for the Hero Challenge, which this week returns to the British Masters supported by Sky Sports. 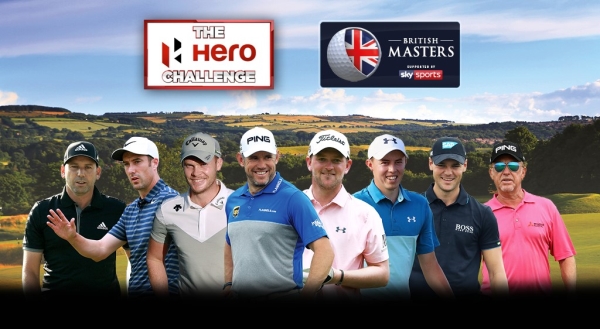 The Spanish stars will join Englishmen Matthew Fitzpatrick, Danny Willett, Ross Fisher and tournament host Lee Westwood under the lights on Tuesday September 26, as well as Germany’s Martin Kaymer and Austria’s Bernd Wiesberger, all of whom will take part in the European Tour’s exciting one-hole knockout contest for the first time.

The players will feature in seven quick-fire head-to-head knockout matches over a specially constructed par three hole at Close House, with the last man standing crowned champion two days before the venue near Newcastle upon Tyne hosts the British Masters supported by Sky Sports for the first time from September 28-October 1.

The rivalry will not only be fierce amongst the professionals, with celebrities also set to take part in a separate nearest the pin competition, including Liverpool legend Robbie Fowler, England cricketer Stuart Broad MBE and Gary Beadle from TV’s Geordie Shore.

The Hero Challenge will be televised live on Sky Sports from 7.30pm-9.00pm, and across the European Tour’s platforms, with free tickets to be there in person available here.

Garcia, who accepted an invitation from his Ryder Cup teammate to return to the British Masters for the first time since 1998 – returning the favour after Westwood participated in Garcia’s charity event, Sergio and Friends, in Switzerland last summer – is looking forward to getting involved in the innovative Hero Challenge concept.

“I’m excited to take on the Hero Challenge and have a bit of fun with a very competitive group of guys,” said Garcia. “I’m sure we are going to get some big crowds as I have heard they love their sport in the north east, so I’m looking forward to soaking up the atmosphere and putting on a good show for the fans on Tuesday night.”

Fan favourite Jiménez will certainly prove a popular addition to the Hero Challenge line up, the charismatic Spaniard is a natural entertainer and will no doubt be in his element on Tuesday evening under lights.

He said: “It’s great the European Tour is bringing this kind of innovation to the players and our fans. I’m looking forward to a fun night at the Hero Challenge and hopefully it will be the perfect start for me ahead of the British Masters.”

All eight players will make their first appearance in the exciting knockout contest which debuted at last year’s British Masters at The Grove and returned earlier this year at the Aberdeen Asset Management Scottish Open, where American Patrick Reed defeated Tyrrell Hatton in a close-run final. The final edition of 2017 is set to take place at the DP World Tour Championship, Dubai at Jumeirah Golf Estates.

Fans can watch the Hero Challenge for free with tickets available here and can purchase tickets to see Westwood, alongside Garcia and four-time Major winner Rory McIlroy at the British Masters supported by Sky Sports at Close House from September 28-October 1, by clicking here