The PGAs of Europe Fourball Championship, last staged six years ago on the Costa del Sol, Spain, is to be revived by Antalya Golf Club in Belek, southern Turkey, in an attractive back to-back tournament fortnight in January 2011.

Staged over 54 holes for a prize fund of up to €50,000, it will be played over the Pasha and Sultan courses with the final round on the PGA-branded latter course, in the week preceding the annual PGAs of Europe-endorsed Kempinski ‘The Dome’ Pro-Am.

The actual prize fund, for the field of PGA professionals only, will depend on the amount of entries received, with a basic €25,000 rising to €50,000 for a field of 120 pairs.

Coming so soon after it was recently announced that the 72-hole PGA Professional Championship of Europe, (the individual strokeplay title), was to return in October 2011, hosted by Pravets Golf & Spa, Bulgaria, the return of the Fourball Championships completes the most comprehensive PGAs of Europe programme ever.

Next year it will also include, as always, the annual International Team Championship along with an unprecedented pro-am schedule.

When staged in January for three successive years up to 2004 (at Atalaya Park and Los Flamingos, Marbella), the fourball tournament proved a massive draw for pairs of pros from around Europe as they took the chance of a more relaxed but very competitive form of golf in southern climes when much of central and northern Europe courses were closed. 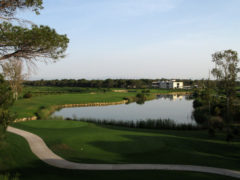 Director of Golf for Antalya Golf Club, John Dent commented: “This will be a major event in the PGAs of Europe calendar and will precede the Kempinski Pro-Am which is now in its 4th year. It will be a great chance for the pros to play some winter golf in warm sunny weather and an atmosphere which will be a little more relaxed.

“The last time it was held there were 100 pairs playing and we are hoping to exceed this and make the tournament a firm fixture once again, I hope to see new faces and some of the old faces down in sunny Turkey in January.”

At professional level fourball, betterball golf, a format enjoyed by many weekend amateurs, inevitably produces birdie chances on almost every hole – as illustrated so dramatically in Ryder Cup battles. This appetising prospect drew a field of more than a hundred pairs when the PGAs of Europe Fourball title was last contested.

The entry includes a 5 night package on an all-inclusive basis in the Sirene Hotel, all golf and a Gala Dinner.