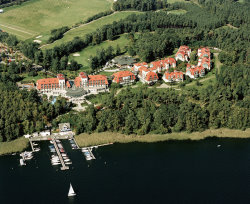 The new Faldo Series Germany Championship is to be played over the acclaimed Faldo Course at the Sporting Club Berlin in the Sport & SPA Resort A-ROSA Scharmützelsee on August 14-15, 2010, and increases the total number of countries featuring on this year’s Faldo Series Europe schedule to a record 11.

Germany is the fourth new country to feature on the expanding Faldo Series Europe schedule this year with other new events already announced in Greece, The Netherlands and Slovakia.  Other countries on the 2010 schedule include England, Scotland, Wales, Northern Ireland, Russia, Brazil and Poland.

The European winners will be joined by Japan’s Masamichi Ito and Thailand’s Thidapa Suwannapura who won the Boys’ and Girls’ titles at the 2010 Faldo Series Asia Grand Final, staged earlier this year at Mission Hills in China.

The Faldo Series Asia schedule has also increased markedly over the last couple of years and in 2010 comprises a total of 17 events in China, The Philippines, Singapore, Vietnam, Bahrain, Hong Kong, India, Malaysia, Japan, Chinese Taipei, Indonesia and Thailand.

“I am delighted to announce the introduction of our first Faldo Series tournament in Germany and I am proud that it is to be played over my course at Sporting Club Berlin,” said six-time Major winner, Sir Nick Faldo, who founded his eponymous Faldo Series Europe back in 1996 and then introduced the Faldo Series Asia in 2006.

“This is another important milestone for us and we are proud of the progress we have made and of our contribution in helping to develop new generations of young champions all around the world.

“Over the years, our winners have included Rory McIlroy, Nick Dougherty, Marc Warren, Yani Tseng, Melissa Reid and Florentyna Parker, all of whom have since won on Tour.  With a bit of luck, the new Faldo Series Germany Championship might help to unearth a new champion from Germany.”

A-ROSA Golf Director Vanessa Herbon added “It finally offers young German talent the great opportunity to participate in this international series and benefit from the knowledge and experience of Sir Nick Faldo and his team. It will be a pleasure to use all our experience to organise a high profile tournament, which all participants will enjoy and remember.”

The Faldo Course at the Sporting Club Berlin was opened in 1996 and regularly features on the lists of leading golf courses in Europe. It hosted the German Open on the European Tour in 1998 and 1999 and a European Senior Tour Event. It has also staged the European Amateur Championship in 2007 and the World Amateur Team Championship in 2000.

The Faldo Series Europe (charity number 1102719) is underwritten by its founder and receives support from a range of Partners including Lough Erne Resort, The R&A and the European Tour. The PGA also supports the Faldo Series within the UK.