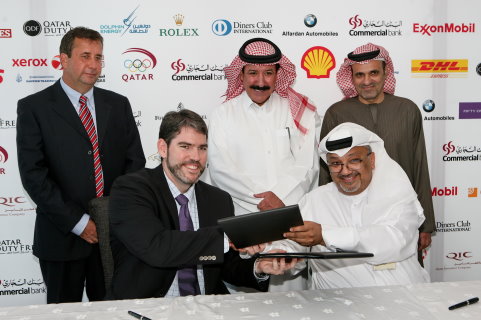 ExxonMobil Qatar has underlined its ongoing commitment to the Commercialbank Qatar Masters, presented by Dolphin Energy, by signing a two-year sponsorship agreement with the Doha-staged European Tour golf event.

This deal builds on many years of sponsorship between ExxonMobil and the event since first staged in 1998. This year’s tournament will again be hosted by the Qatar Golf Association (QGA), the Qatar Olympic Committee (QOC) and the Commercial Bank Qatar at Doha Golf Club from February 2 – 5.

“ExxonMobil has been firmly behind this tournament since it began fourteen years ago and we are delighted to have seen it grow to become one of the premier overseas tournaments on the European Tour schedule,” said Bart Cahir, President and General Manager of ExxonMobil Qatar Inc. “With first appearances by Jason Day and Hunter Mahan – two of the brightest talents in the game – golf fans around the world will look to Qatar to see who will be named the next champion.”

“Qatar’s leadership has identified sports as a way to showcaseQatarto the world – and events like the Commercialbank Qatar Masters demonstrateQatar’s great success in this area,” said Cahir. “Thanks to the Qatar Golf Association, Qatar Olympic Committee and Commercialbank, this golf tournament ranks alongside the very best in the sport and again confirms the nation as a home of world-class sporting properties – a key component in the Qatar National Vision 2030.”

“The Qatar Golf Association and ExxonMobil have an excellent relationship stretching back to the first professional tournament staged here back in 1998,” said Al Raisi. “This tournament benefits from working hand-in-hand with sponsors who are not only supporters of sport but also of the State of Qatar. ExxonMobil is one of those sponsors who work with us to maintain the event’s status as one of the most popular and professional events on the players’ calendar and we thank them once again for showing their commitment to the tournament’s future.”

“We have a powerful line-up of players and an equally-strong collection of sponsors,” added Tournament Manager Chris Myers. “Our thanks go to ExxonMobil for their support in what we have achieved and their belief in the event’s future.”

Arccos has launched a new app for Apple Watch which allows Arccos Caddie players to record all of their shot data and access the game’s first Artificial Intelligence-driven rangefinder without having to carry a smartphone in play.