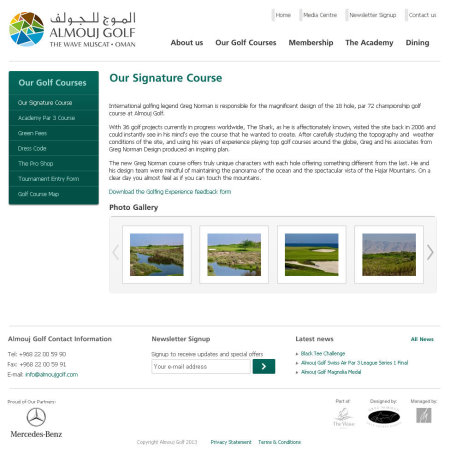 The eagerly awaited National Bank of Oman Golf Classic has received a resounding endorsement from Jose Maria Zamora, Tournament Director of The European Tour, on his recent visit to Oman and Almouj Golf The Wave Muscat.

“The commitment of the National Bank of Oman to the Classic is superb,” says Zamora. “This is the Challenge Tour’s only tournament in the Middle East and we want to make it a really special event. We’ve got all the ingredients for a great Classic, an excellent three-year sponsorship, players who will become the stars of the future, a magnificent golf course and warm, sunny weather.

“This will be one of the strongest fields of the year on the Challenge Tour with all our players pushing for top places in the event to get into the top 45 on the Tour and make it into the Grand Final from which the leading 15 players will gain their cards to play on The European Tour 2014 Schedule. The National Bank of Oman Golf Classic also includes a maximum of 10 invitations for local amateurs and has already invited the top two players in the recent GCC Golf Championship, played at The Wave.”

It was Zamora’s first visit to Oman and he was hugely impressed with the sultanate and The Wave, saying: “Greg Norman has created a fantastic golf course at The Wave and the practice facilities are ideal for our players. The par-3 course also helps them hone their game.

“The National Bank of Oman Golf Classic on Thursday, October 24th to Sunday, October 27th, comes the week before the Challenge Tour’s season-ending Grand Final and the week after our event in China.

“We are indebted to the National Bank of Oman for their sponsorship in supporting the Classic,” adds Zamora. “Hopefully, the success of the event may encourage other sponsors to enable the Tour to have back-to-back tournaments in the Middle East.”

The National Bank of Oman is committed to developing Golf in the sultanate and in addition to their three-year sponsorship of the National Bank of Oman Golf Classic the bank also brought a significant boost to the GCC Golf Championships played at Almouj Golf The Wave Muscat in February. “Putting Oman on the international golfing map is the priority at this stage, holding a professional international event of such reputation is a step towards bringing this to reality,” said Mohammed Mahfoud Al Ardhi, Deputy Chairman, National Bank of Oman. “Oman has developed a solid infrastructure to support such initiatives and we believe it is the role of the private sector to realise the vision of our nation,” he added.

Zamora concluded: “The Classic will be a boost to the rapidly growing number of Omanis who are taking up the game, to learn from watching the Challenge Tour players competing in the tournament. There is very little difference in the quality of golf between The European Tour and the Challenge Tour, which has produced many of the game’s leading players over the years, including Ryder Cup stars Ian Poulter, Justin Rose and Nicolas Colsaerts, and Major winners Trevor Immelman Louis Oosthuizen, Martin Kaymer and Michael Campbell to name but a few.

“In a few years’ time the spectators at The Wave will be watching The Ryder Cup and the Majors and saying that they saw those players in action up close in the National Bank of Oman Golf Classic.”