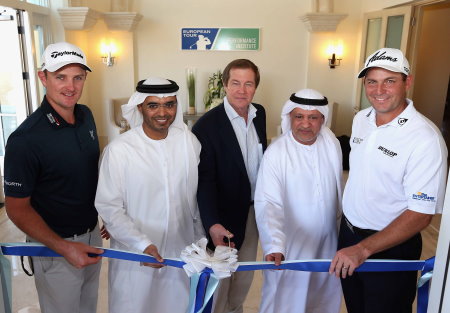 The first European Tour Performance Institute (ETPI) in the Middle East has been officially opened in a glittering ceremony within the new state-of-the-art ETPI complex at Jumeirah Golf Estates (JGE) in Dubai.

Then the four players simultaneously struck the opening shots from the impressive teaching bays in the ETPI, located between the Fire and Earth courses at Jumeirah Golf Estates, which recently joined the expanding network of European Tour Destinations.

The new ETPI, only the second of its kind on The European Tour following the launch of the inaugural Performance Centre at TerreBlancheHotel, Spa and Golf Resort in France last year, contains unrivalled facilities in the United Arab Emirates.

Jumeirah Golf Estates has partnered with Scandinavian Health Performance (SHP), one of the UAE’s premier well-being organisation, to deliver a unique approach to encompass all aspects required for developing golfers.

“Together with the opening of The European Tour Performance Institute, we are currently handing over villas to our homeowners and very soon we will recommence works to the main clubhouse, which will be partially opened by October 2014. In addition to Jumeirah Golf Estates recently gaining European Tour Destination status, we are delighted to be further enhancing our relationship with The European Tour.”

O’Grady welcomed the completion of the ETPI in Dubai, saying: “The European Tour has been linked closely to the UAE, and Dubai in particular, for the past quarter of a century and it has been a privilege to see how the game has grown in this vibrant city, both professionally and at grass roots level.

“The construction of this superb new Performance Institute at Jumeirah Golf Estates, host venue for this week’s season-ending tournament, the DP World Tour Championship, provides further evidence of that growth and re-emphasises the Tour’s commitment to this internationally acclaimed golfing destination. Everyone – from Tour players to club members and the casual visitor – will benefit greatly from the first rate facilities attached to the ETPI.”

Wayne Johnson, resident PGA Professional and Director of Instruction at the ETPI at Jumeirah Golf Estates, commented: “The European Tour Performance Institute brings an holistic approach to refining, improving and optimising all areas of a player’s performance. Strength and conditioning studios, sports therapy treatment and cutting edge video analysis help us to understand all areas of a golfer’s ‘DNA’, enabling them to realise and achieve their golfing goals.

Neal Graham, General Manager – Club Operations, Jumeirah Golf Estates, added: “We are proud to be able to unveil one of the finest instructional facilities in the world, which not only enhances our partnership with The European Tour, but affords golfers of every level the opportunity to improve their game and to understand all the other components associated with becoming a better and fitter golfer.”

The ETPI is one of the finest instructional facilities offering an unrivalled teaching and practice experience, giving amateur golfers the opportunity to “rub shoulders” with the best players in the game. In the last few seasons, Dubai’s prime location, warm climate and first class facilities have proved an irresistible draw for many top European Tour professionals to hone their game for tournament golf.