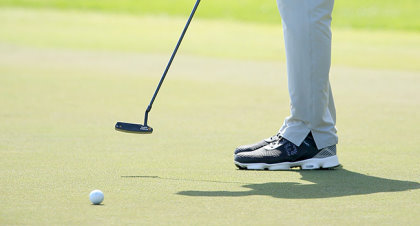 The stars of the European Tour will showcase their skills and performance under pressure in an innovative new, made-for-TV challenge which will be introduced at the BMW PGA Championship.

The ISPS HANDA Pressure Putt Showdown will feature star players and celebrities battling it out on the putting green for a £10,000 prize which will be donated to charity, with music and audience participation adding to the atmosphere.

The unique format is designed to bring a whole new level of fan interaction and entertainment to European Tour events, as part of Chief Executive Keith Pelley’s strategy to raise the profile of the tour by engaging fans and players alike with exciting new ideas.

The Pressure Putt Showdown will make its debut on the eve of the BMW PGA Championship at Wentworth Club on Wednesday May 25, and will also take place at three subsequent events – the Aberdeen Asset Management Scottish Open, the British Masters Supported by Sky Sports and one other.

The inaugural Showdown, at the European Tour’s headquarters in Surrey, will put eight teams of two – one European Tour star and one celebrity partner – in the spotlight and will begin with each team putting from a distance of three feet.

Chief Executive of the European Tour Pelley said: “This is one of the many innovations we have been working on to widen the appeal of our game to greater audiences and to showcase the immense talent and personality of our stars.

“Of course, the BMW PGA Championship has always been an immersive event which engages fans and creates a real festival atmosphere through its music, food, celebrity and tented village aspects, so this is the perfect tournament to unveil our ISPS HANDA Pressure Putt Showdown.

“We are delighted to welcome ISPS HANDA on board for this exciting new venture. Dr Handa shares the European Tour’s vision that, through such innovative initiatives as this one, we can reach a whole new audience of sports fan and so he was eager to come on board and support this project.”

ISPS chairman and founder Dr Haruhisa Handa voiced his enthusiasm for the event, saying: “ISPS HANDA fervently supports the role that sport plays in breaking down barriers, as well as the power it exercises in creating hope, inspiring people and ultimately transforming society. The Pressure Putt Showdown promises to further enfranchise the game, by presenting golf in an exciting new perspective for budding novices and first time players of the sport alike.”

The Confederation of Professional Golf [CPG] have announced the launch of the Business Club by CPG, which extends the CPG’s Corporate Partnership Programme and embraces the notion of Golf as the ‘Sport of Business’.