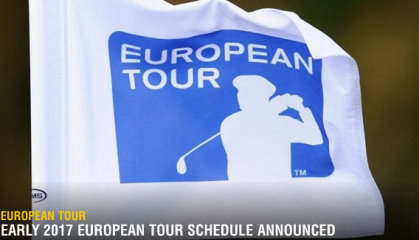 The European Tour has announced the early part of its 2017 international schedule, which begins with the Australian PGA Championship from December 1-4.

Held at RACV Royal Pines Resort, the tournament takes place two weeks after the conclusion of the 2016 Race to Dubai at the DP World Tour Championship, Dubai, and a week after Australia hosts the World Cup of Golf at Kingston Heath Golf Club, in Melbourne.

The UBS Hong Kong Open will then round off the 2016 calendar year when the 58th edition of the tournament takes place at Hong Kong Golf Club from December 8-11.

The action resumes following the Christmas break, when the European Tour returns to South Africa for the BMW SA Open hosted by the City of Ekurhuleni, at Glendower Golf Club, from January 12-15; before the traditional ‘desert swing’ starts with the Abu Dhabi HSBC Golf Championship from January 19-22, followed by the Commercial Bank Qatar Masters from January 26-29, and culminating with the Omega Dubai Desert Classic from February 2-5.

Saujana Golf & Country Club, a European Tour Destination, hosts the second edition of the Maybank Championship Malaysia from February 9-12, before the European Tour heads back to South Africa for the Joburg Open, at Royal Johannesburg & Kensington Golf Club (February 23-26) and the Tshwane Open, at Pretoria Country Club (March 2-5) – the latter of which takes place in the same week as the season’s first World Golf Championship, the WGC-Mexico City Championship, at Chapultepec Golf Club.

The Hero Indian Open, which takes place from March 16-19, is followed by the WGC-Dell Match Play in Austin, Texas, from March 22-26, before the Masters Tournament, at Augusta National, marks the first Major Championship of 2017, from April 6-9.

Morocco will be the tenth country visited as part of the 2017 international schedule when the Tropheé Hassan II returns to Royal Golf Dar Es Salam, in Rabat, from April 13-16, reflecting the diversity of the European Tour ahead of a fortnight on Chinese soil, starting with the Shenzhen International, at Genzon Golf Club (April 20-23), followed by the Volvo China Open (April 27-30).

Keith Waters, the European Tour’s Chief Operating Officer, said: “The initial sector of the 2017 European Tour International Schedule once again reflects the global nature of the European Tour, taking in ten different countries over the first five months of the season.

“It also highlights the strong relationships we have in these territories, particularly with the ISPS HANDA PGA Tour of Australasia, the Sunshine Tour and the Asian Tour.

“We hope to have further updates about this initial sector in the near future, including the possibility of an additional tournament in South Africa, before, in keeping with recent tradition, we unveil the schedule in its entirety during the DP World Tour Championship, Dubai in November.”