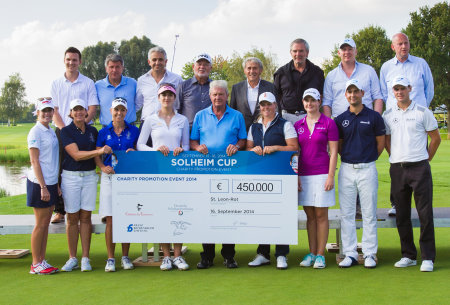 Golf professionals, celebrities, the media and fans had a taste of what The 2015 Solheim Cup will be like as they attended a marathon Charity Promotion Event with a year to go until the matches in Germany.

In the process of hitting golf shots to a floating target on the River Neckar from the Old Bridge in Heidelberg, attending a gala dinner, press conference and Charity Show Match at Golf Club St. Leon-Rot, a lot of fun was had with €450,000 raised for charity.

The fun started with the ‘Golden Charity Shot’ on Heidelberg’s Old Bridge on Monday afternoon, where they were joined by celebrities such as Stefanie Graf, Franz Beckenbauer, John Solheim, Uschi Glas and Rea Garvey and raised €39,000 for charity.

The same evening, as the guests of SAP founder Dietmar Hopp, they attended a gala dinner at Heidelberg Castle, where there was a silent auction for a range of prizes including a trip to the Champions League with the squad of FC Bayern. This raised a further €126,000.

The Charity Show Match on Tuesday, played in perfect weather, was undoubtedly the highlight. The day began with a spectacular show on the driving range, where local children were able to play a chipping competition against the best players in the world. They started by chipping onto a miniature beach, followed by a ‘gong’ shot, with €250 raised for each shot on target.

The stakes were raised as the eight professional golfers hit shots through three rings located 75 metres from the tee, with each ring hit amassing €5000 and €10,000 for all three. Moritz Lampert was the star of the show when he hit an air balloon with a golf ball from 100 metres away at the first attempt, raising €25,000. The driving range activities raised €81,250 in total.

The players then moved on to the St Leon Course, for a special 14-hole show match open to the public and attended by 4,000 spectators. For the first nine holes, each player used their own ball, but for the 10th, 11th, 12th and 17th hole they played in team foursomes, raising funds for scores of par or better. Interestingly, the European and United States captains played together, as did Sandra Gal and Caroline Hedwall, Caroline Masson and Sandra Gal and Moritz Lampert and Martin Kaymer.

The 18th hole was played in a five shot challenge format which included driving, pitching, bunker shots, chipping and putting, with yet more financial incentives. The match raised €203,750 for charity, with a grand total of €450,000 from the two day’s activities.

At the end of show awards ceremony, each participant was given a German World Cup football shirt with their name on the back by Golf Club St. Leon Rot.

European Team Captain Carin Koch commented: It’s quite amazing the event they have put on here with one year to go and it just gives you an idea how great this event will be in a year. The gala dinner last night, today, everything. To get all the people to come out, it was an amazing day. The whole facility is amazing.”

United States Team Captain Juli Inkster was equalled enthused and said: “It was fabulous. It was great to see where we’re going to be, how the golf course is going to play and the enthusiasm of the German people. SAP and Allianz and PING and Rolex: it’s going to be a great week. We’re going to have to bring our ear muffs because it’s going to be pro Europe, but we expect that and I’m looking forward to the challenge.”

Five-time United States team member Paula Creamer said: “It’s been great. I’ve never been a part of something like this with Solheim coming to a place before. I think that Germany is going to be a great host. I know there will be a lot of people watching and I’m looking forward to coming in 2015.

“Germany is on an emotional high with their sports so I know that they’re going to be pulling for team Europe. We’re just going to need as many fans as we can get. The shirt was probably the highlight of the day. It’s great having your name on the back of a jersey and it being from the World Cup; it’s awesome. That was a very good present.”

Sandra Gal, a member of the victorious Solheim Cup team in Ireland in 2011, commented: “It was really good to see the excitement and how well it was organised just to give you a little taste of how it’s going to be in one year. It was the first time seeing the course for me, so that was really neat. I was really motivated before but even more so now having been here and seeing how much it means to everyone in Germany and obviously it would be a dream come true to play in front of the home crowds.”

Fellow German player Caroline Masson, who was a member of the first European Solheim Cup team to win in the United States in 2013, added: “It was great to play with Martin and Moritz. We had a lot of fun but we also wanted to play well because it was for charity. Being here, seeing the course and involvement of the spectators make me really look forward to the Solheim Cup and I will give everything to be on the team in 2015.”

Martin Kaymer, who will play in the Ryder Cup in just over a week’s time, said: “When I first heard that The Solheim Cup was coming to Germany and also that SAP and Dietmar Hopp were involved, I was certain that it would become great. I downloaded The 2015 Solheim Cup App and I was surprised how good it was. There are already many insights from players and a lot of interactive tools. The fan experience at the 2015 Solheim Cup will be great.

“Much has happened in women’s golf in the last two or three years. That the biggest event in women’s golf is coming to Germany is something we can be proud of. If I can arrange it, I would be glad to be there and to be part of it next year.”

The charities to benefit from the promotion event are “Children for Tomorrow” (Stefanie Graf), the German University Sports Foundation, the Franz Beckenbauer Foundation and the foundation “Saving an Angel” (Rea Garvey).

Jay Karen, CEO of NGCOA, Elisa Gaudet, President of Executive Golf International, and Miklós Breitner, author of Golf Business Monitor, have joined the programme at GolfBIC.online which will be held on March 2nd, 3rd and 4th

Golf tour operator GolfKings has announced a further expansion of its sales team with the appointment of two new members of staff.