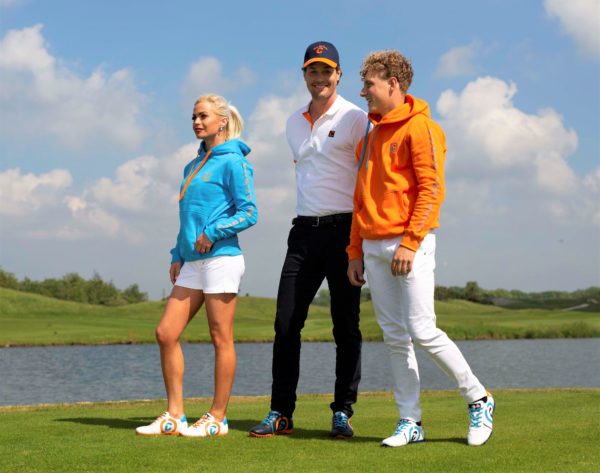 Fashion brand Duca del Cosma is supporting the 100th anniversary of the Dutch Open next week (12-15 Sept) as official footwear and clothing supplier to one of Continental Europe’s oldest golf tournaments.

For the second consecutive year, the Dutch-based brand is providing footwear and branded apparel to more than 1,500 officials and volunteers at the KLM Open, which is being held at The International in Amsterdam.

The extensive provision includes a limited-edition shoe collection consisting of six different styles that reflect the colours of the main sponsors – blue & white for the national airline and orange for ING Private Banking. They form part of a range of some 150 golf and lifestyle shoes that will be on display and sale during the tournament.

“Once again, Duca del Cosma is proud to be associated with this great European Tour event and especially at such an historic time for golf in Holland,” said chairman Frank van Wezel. “Our first involvement last year really put Duca del Cosma on the tournament golfing map and so we’re looking forward to raising the rejuvenated brand’s profile even more this year,” he added.

With 100 generators, battery storage, and 65 miles of cable, Aggreko is meeting all power, heating, and cooling needs for the event, which draws nearly 50,000 spectators each day