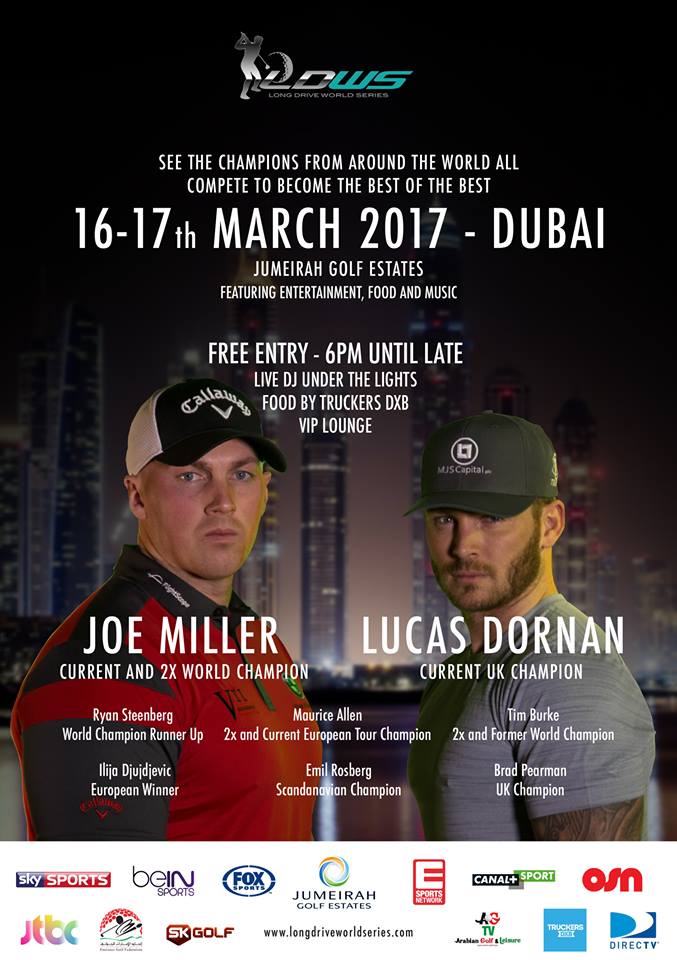 In a city known for firsts, Dubai residents and sport enthusiasts should get ready for one more as the city readies to host the first event in the inaugural Long Drive World Series, 17 March, 6pm at Jumeirah Golf Estates.

Challenging everything expected of, or known, about golf events – and golfers- the Long Drive World Series Dubai will see eight of the world’s very best Long Drivers battle it out in what will be the first round of the 4 – city series. The first time ever that all eight international champions will compete in the same event anywhere in the world, the Dubai event promises spectators an outstanding show as competitors look to settle old scores.  With a live DJ, pyrotechnics, food and much more the event also promises to be a great night out for friends and family alike.

“This event is going to be long drive like the world has never seen,” said Lucas Dornan, UK Long Drive Champion and Long Drive World Series competitor. “The very best in the world are travelling to Dubai to put on a spectacular event for fans.”

Julian Small, Managing Director, Club Operations, at Jumeirah Golf Estates, said: “With just a few days to go, the countdown is well and truly on for this fantastic competition to get underway here at Jumeirah Golf Estates, home to two of the world’s most highly acclaimed golf courses and the European Tour Performance Institute. The confirmed line-up ensures that it’ll be an exciting event to participate in and to watch! We’re looking forward to playing host to some world-class talent and putting on a night of guaranteed entertainment for all.”

One competitor with revenge firmly in mind is American long drive star Ryan Steenberg, who finished second to the UK’s Joe Miller in the World Long Drive Championship last year: “I’ve got unfinished business to attend to after coming second to Joe at the World Championships,” commented Steenberg. “Since then, I have been hungrier than ever to make another run at him, along with the rest of the world-class field in Dubai. I was regularly hitting over 400 yards last year and have been training hard. With a new equipment set up and an explosive engine to match, expect to see some fireworks when I get on the tee at Long Drive World Series.”

The format of the Long Drive World Series event is designed to have crowds on the edge of their seats and deliver some real upsets for the so-called experts. There will be sudden death knockouts and head to head battles, as well as the unknown challenge of two wildcard places. Women or men who believe they have the drive and gusto to go head-to-head with some of the world’s best can score a wildcard one of two ways:

eGolfMegastore Al Wasl: The first way is to visit eGolfMegastore’s Al Wasl, branch in Dubai where would-be long-drivers can record their longest drive for a chance to fill one wildcard place. Entries close on 14th March those thinking about it are encouraged to get moving.

Open Qualifier, 16 March, 2pm: The second way is for golfers to take a long-lunch on Thursday, 16th March and join the Open Qualifier at 2pm at Jumeirah Golf Estates.

Along with the opportunity to compete against the main field, and forever hold bragging rights, the two wild-card entries will also be eligible to win their share of the of 223,281 AED (£50,000) event prize fund.

“The talent on show is world-class, and you never know who will score a wildcard” added Dornan. “We’re looking forward to putting on a good show for all the spectators and I would highly encourage them to come down for what will be a fun night.  It’s absolutely free and I can guarantee they’ll see an event like they never have before.”

The innovative, contactless, thermal entry system comes in a slimline panel tablet and is compatible with most existing gateway systems to ensure those entering the building are not running a temperature