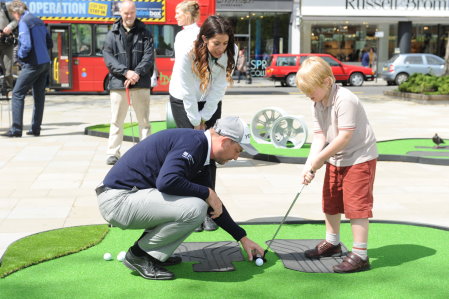 The ‘Challenge’ – a three-hole mini golf course, incorporating BMW car parts as hazards and obstacles – was located in Duke of York Square on the King’s Road for three days, bringing a taste of golf to the heart of London and providing visitors to the area with an opportunity to put their putting skills to the test.

Howell’s appearance at the ‘Performance Putting Challenge’ – located close to HUGO BOSS’ flagship store in Sloane Square, where, throughout May, the front window will feature a BMW M6 convertible and a display dedicated to the European Tour’s premier event – also served to build anticipation ahead of the BMW PGA Championship 2013, taking place at the glorious Wentworth Club, in Surrey, between 21 – 26 May.

After tackling the three-hole ‘Performance Putting Challenge’, Howell said: “This initiative is all about taking golf and the BMW PGA Championship to new audiences. The three-hole course is great fun to play and I’ve seen all sorts of people getting involved; young, old, families, experienced golfers, even complete novices who’ve never picked up a golf club before. It’s been a great event.”

The European Tour has teed up its strongest ever player line-up for this year’s six-day event, including all 12 of Europe’s victorious Ryder Cup Team, who will be reunited on European soil for the first time since the ‘Miracle at Medinah’.

Looking ahead to the tournament itself, Howell said: “If you’re a member of The European Tour you want to play in the biggest event we have and that is the BMW PGA Championship. It’s The Tour’s flagship event and, as I live in Surrey, it’s also my home tournament, so it was a big thrill for me to win in 2006 and an achievement I’m very proud of.

“There is a real Major Championship feel about the BMW PGA Championship. It’s the mix of a superb venue at Wentworth, great crowds throughout the week, an amazing atmosphere, the tournament’s heritage and the way BMW put the event on; not to mention the exceptionally high quality field this year. It’ll be great to see all the guys from that miraculous Ryder Cup victory back in town. It’s a fantastic sporting event, let alone golf tournament, and if you’re a golf fan it’s a superb opportunity to see Europe’s best players in action.”

Commenting on his own chances at Wentworth, the popular Englishman added: “I’ve been playing really well recently and over the last year have played my most consistent golf since 2006, when I won the BMW PGA Championship. I’ve been threatening with chances to win tournaments, but haven’t quite managed to seal the deal; but I’m getting closer all the time. It’s exciting. I feel I’m due a bit of luck on a Sunday and there would be nowhere better to do it than at Wentworth next week.”

The BMW PGA Championship ‘Performance Putting Challenge’ moves on to Brands Hatch this weekend (17-19 May), where the three holes will feature as part of a BMW stand at the British round of the DTM Championship.

Peter Walker, General Manager of BMW Sports Marketing, said: “With the ‘Performance Putting Challenge’ we hope to introduce both golf and the BMW PGA Championship to new audiences. DTM at Brands Hatch attracts excellent crowds over all three days, some of whom may never have played golf or considered coming to Wentworth. It will be good to get the fans involved; some of them may be surprised just how enjoyable, accessible and affordable the tournament is. We’re even expecting our own BMW Team RMG drivers to take on the ‘Performance Putting Challenge’, including three–time World Champion and British driver, Andy Priaulx.”

Jamie Birkmyre, Championship Director of the BMW PGA Championship, added: “The BMW PGA Championship marks the start of another great summer of British sport and is an exceptional day out for golf enthusiasts, sports fans and families alike. There really is something for everybody, with a superb package of fun, celebrity-spotting and world class golf taking place over a six-day period. Hopefully we’ll see a few more motorsport fans joining us at Wentworth next week.”

Advance tickets are selling fast on www.europeantour.com/tickets while reserved grandstand seating at the 18th green and limited on-site parking are already sold out. Children aged 16 and under will be admitted free of charge if accompanied by an adult ticket holder.

BMW Owners and Official Badge Holders will be able to park on site as in previous years, while pre-paid parking on Wentworth Estate is now completely sold out. All other ticket holders – and spectators turning up on the day to purchase tickets on the gate – will need to utilise a sophisticated Park and Ride system, being introduced this year to help facilitate the flow of traffic.

The new Park and Ride system will operate from two locations – one near Sunningdale, carrying traffic from the West (M3 and M4) and one at the Review Ground, WindsorGreatPark, which is East of the tournament venue close to the M25. Both parks will operate free shuttle bus service to Wentworth Club every five minutes with the journey time taking around ten minutes and allowing easy access to a new Welcome Pavilion through the TentedVillage.

For further information, or to book tickets, visit www.europeantour.com