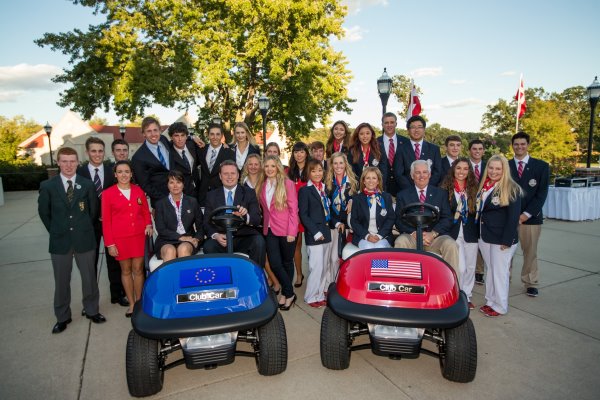 While European and American golfers lined up for The Ryder Cup at Medinah, the Junior Ryder Cup was teeing off at Olympia Fields Country Club, Illinois– and just like the main event, Club Car was on hand to give teams and officials a lift.

The biennial contest, which precedes The Ryder Cup, brings together two teams of talented boys and girls under the age of 18.

And with fully liveried Club Car golf cars in American red and European blue available to both teams, it had the look and feel of the main event.

However, the result was somewhat different with the Americans winning their third straight Junior Ryder Cup 14½-9½.

“The Junior Ryder Cup celebrates the great work carried out by PGA Professionals, golf club volunteers and governing bodies to help develop young talent in Europe and the USA,” commented Fredrik Lindgren, Junior Ryder Cup European Match Director. Club Car knows the importance of first class operations at club level, which showed in its support of the Junior Ryder Cup with the same Captains’ cars as we saw at Medinah later on in the week.”

Fredrik Lindgren added: “The junior players loved riding along with their captains to cheer on their team mates after their own matches had finished. It was inspiring to watch.”

Club Car is the world’s largest manufacturer of small-wheel, zero-emissions electric vehicles, and will supply a fleet of golf and utility vehicles for The 2014 Ryder Cup at Gleneagles.

The Junior Ryder Cup in 2014 will be played at Blairgowrie Golf Club, Scotland.