Champion Golfers’ Challenge Draw Released ahead of The Open 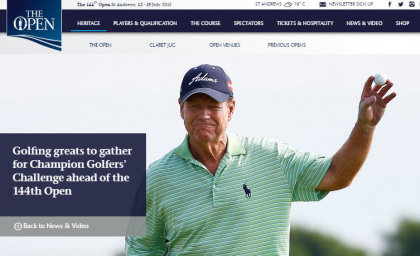 Champion Golfers whose victories span 60 years of Open history will take part in the Champion Golfers’ Challenge at St Andrews ahead of The 144th Open next week. The draw for the historic contest on Wednesday 15 July, which will see 28 Champion Golfers with a combined 45 victories in golf’s oldest Championship taking part, is published today.

Peter Dawson, Chief Executive of The R&A, said, “The Champion Golfers’ Challenge will be a wonderful event for the many thousands of fans at St Andrews as well as those watching on television around the world.

“We have been privileged to watch these great players competing in The Open over the last 60 years and they have given us tremendous enjoyment in that time. I am sure this will be a hugely memorable occasion for players and spectators alike.”

The four-hole challenge on the Old Course will be contested by an array of players, who each share the distinction of having won The Open to become The Champion Golfer of the Year, and features some captivating groupings among the seven teams taking part.

In the first team, which tees off at 4.10pm, three-time Champion Golfer Tiger Woods will play with his long-time friend, the 1998 Champion Mark O’Meara. They will be joined by the 1994 Champion Nick Price and team captain Tom Weiskopf, who won at Royal Troon in 1973.

On the 40th anniversary of his victory at Carnoustie and ahead of his final appearance in The Open, five-time Champion Golfer Tom Watson will captain the third team, teeing off at 4.32pm. Watson is joined by the 1991 and 2004 Champions Ian Baker-Finch and Todd Hamilton as well as Louis Oosthuizen, who won The Open the last time it was played in St Andrews in 2010.

Watson’s fellow five-time Champion Golfer, Peter Thomson, who first lifted the Claret Jug in 1954 and is celebrating the 60th anniversary of his victory at St Andrews in 1955, will captain the team comprising the 2013 and 2012 Champions, Phil Mickelson and Ernie Els, and Ben Curtis, who won in 2003, which tees off at 4.43pm.

The last two Champions from England, three-time winner Sir Nick Faldo and Tony Jacklin, who won in 1969, will be joined by Americans John Daly, who won The Open at St Andrews in 1995, and Tom Lehman, the victor at Royal Lytham & St Annes in 1996. They tee off at 5.05pm.

The day will be rounded off by a group captained by one of golf’s most popular and acclaimed players, Arnold Palmer. The two-time Champion’s team includes Darren Clarke, who won at Royal St George’s in 2011, and the 1999 and 1981 Champions Paul Lawrie and Bill Rogers.

The Champion Golfers’ Challenge will commence at 3.30pm with a performance from the Royal Marines Band Scotland. BBC Sport presenter Hazel Irvine will act as the Master of Ceremonies on the first tee.

The teams will compete on the 1st, 2nd, 17th and 18th holes of the Old Course for a prize of £100,000 which will be donated to a charity of their choice. The best individual score per team on each hole will count as the team score.

Seating in the grandstands around the 1st, 2nd, 17th and 18th holes is available to spectators on a first come, first served basis.

The challenge will be available to view around the world on TheOpen.com and through the official Open App and will be televised by the BBC and ESPN.

The full draw for the Champion Golfers’ Challenge – Wednesday 15 July